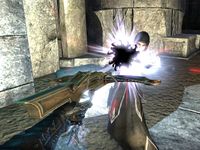 Silver Bolts deals Physical Damage to a single opponent, or up to six opponents with the Silver Shards morph. If you choose the Silver Leash morph, you can activate the skill a second time to pull yourself towards the target, similar to the Dragonknight's Fiery Grip ability.