This article is about the city. For the region, see Winterhold (region).

Winterhold (also spelled out as Winter Hold)[1] is one of the nine major cities in the province of Skyrim,[2] and it serves as the capital city of the eponymous hold, Winterhold. For the longest time, Winterhold served as the capital of Skyrim, one with a rich and illustrious history,[3] and even in its prime, it rivaled Solitude to the west.[4] Most of the city was lost when an event known as the Great Collapse had cast most of it into the Sea of Ghosts in 4E 122.[5] The most well-known landmark in the city is the College of Winterhold, Skyrim's premier institute in the arcane arts.[6]

The College of Winterhold 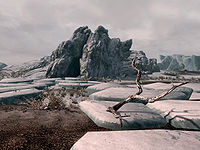 Winterhold is built on Hsaarik Head,[2] the very tip of the Broken Cape and where Ysgramor first landed in Skyrim.[7] From the south, the city is protected by a mountain range that spans across the northern Old Holds, and is surrounded by glaciers of the Ice Fields on virtually all other sides.[8] Despite the fact that the city is located on the coast,[9] and its people commonly work out of the sea,[10] the city is built far above the shore and it is a very steep drop below.[9] But at some point, Winterhold had a port and the island, Olenveld was a summer day's sail from the city.[11]

Winterhold is located at the end of the one road that runs through the region, which wraps around the mountains and runs along the northeast coast. The College of Winterhold is separated from the rest of the settlement by a deep ravine and connected to it via a narrow stone bridge.[9] Winterhold is neighbored by several settlements, including Amol to the south-southeast, Dawnstar to the west, and Helarchen Creek to the southwest.[12]

The scope of Winterhold, before it was destroyed, has never been detailed but after the Great Collapse, the former capital city was a set of homes on the main thoroughfare. The only intact buildings in the town were the Jarl's Longhouse, the local inn across the road, a couple of homes along the mountain, and the College of Winterhold, which remained intact despite the destruction. Homes that are behind the street and closer to the edge of the cape are completely destroyed and encased in snow. A path between the Jarl's Longhouse and the General Goods Store leads into the greater Winterhold wilderness while another path that goes under the bridge to the college wraps around the mountain. The city's prison is called the Chill, an ice cave on a glacial island[8] far north of Winterhold.[9]

For the history of the hold, see the: History of Winterhold 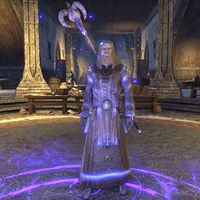 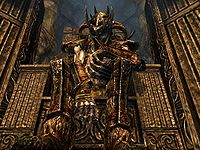 Even though the Nords have lived in the region since they first embarked onto Tamriel,[7] the story of Winterhold's origins have never been fully stated. One of the most well-known myths that date back to the First Era and surround the Arch-Mage, Shalidor was that he built the city from a whispered spell.[6] By the early First Era, Winterhold was already an established city-state and one of its earliest known residents was King Borgas, the last of Ysgramor's dynasty.[14] When Borgas died in distant Valenwood, the seat of the High King was vacant, and Winterhold's jarl, Hanse was the next one in line.[15] But when the Moot passed, Hanse was not given the title and Skyrim delved into a hundred years of conflict called the War of Succession.[7] In that time, Winterhold and other cities fell to the rise of Olaf One-Eye, which was transcribed in Svaknir's contribution to the Poetic Edda.[16]

In the late years of Emperor Kastav's reign, the city of Winterhold openly rebelled against the Second Empire and Kastav ordered the Dragonguard to come in and quell the uprising. But the master of the Dragonguard refused his order on the grounds that it violated their Oath of Allegiance and they paid the price when their supplies were cut off. In their stead, an Akaviri warrior named Kalien was sent to personally stop the rebellion, which led to the city's destruction in 1E 2805 and a scar on the public's perception of the Dragonguard.[17] Despite that, the rebellion ended on a high note when the newly-named Emperor, Reman II ended it swiftly and made peace with the Nords. His ability to restore peace in the north was noted as his first great achievement throughout his tenure.[18] In a map that labels provincial capitals as of 2E 864, made for the 1st Edition of the Pocket Guide to the Empire, Winterhold is listed among them as Skyrim's capital.[1]

Winterhold in the Third EmpireEdit

During the Imperial Simulacrum in the late Third Era, the city-state of Winterhold was an active settlement. It was ruled by King Erarne and had a rivalry with Dawnstar and Windhelm. After they acquired their first piece of the Staff of Chaos from Hammerfell, the Eternal Champion traveled northeast into Skyrim to find the second piece in a place called the Labyrinthian. Their quest eventually brought them to the local Mages Guild in Winterhold, where they met the leader, Thelen Kaarn. He offered to help the warrior if they retrieved a tablet stolen by knights from the Fortress of Ice, a tablet that could decipher a part of an Elder Scroll that would reveal the Labyrinthian's location.[19] After they delved into the dungeon, they returned to Winterhold with the tablet and were able to find their way to the Labyrinthian.[20] After the Eternal Champion defeated Jagar Tharn and rescued Emperor Uriel Septim VII, loyalists of the Empire re-traced the champion's steps throughout their quest and occasionally found themselves in Winterhold.[6]

In the latter years of the Third Era, a large exodus of Dunmer traveled west into Winterhold and brought it into a renaissance of power and influence. The Dark Elves brought their ideals and enriched the city's culture while invigorating its old mercantile spirit. A vast collection of text saved from the east was assembled together by the College of Winterhold and called the Ysmir Collective, which had not only become a cornerstone of academia in the college but brought scholars from all over the Empire to the region.[4] However when the Oblivion Crisis broke out in 3E 433, a distrust in magic soon came over the Nordic populous and pitted them against the Dunmer and especially magic users, even though they were at the forefront of defense against the daedra.[5][21] Many Dark Elves were driven out of Winterhold in the wake of the crisis and the people became increasingly uncomfortable with the college.[3]

The Fourth Era and the Great CollapseEdit 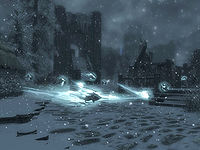 Magical anomalies all over Winterhold 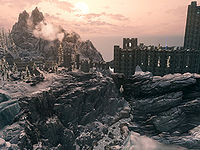 Winterhold after the Great Collapse

When the Red Year took place five years later and many Dark Elves were displaced, the Jarl of Winterhold took in refugees, especially those that could contribute to the College of Winterhold[5] but some of those that already lived in the city left for Morrowind.[21] In 4E 16, the High King of Skyrim had relinquished the island of Solstheim to Morrowind[22] and there was an expectation by the Nords that mages in Winterhold would leave for the island, but that never happened and a lot of people were unhappy.[5]

This contempt from the Nords came to a climax with an event known as the Great Collapse in 4E 122. A series of violent storms clashed onto Skyrim's coast for a year until it ultimately led to Winterhold's destruction as a majority of the city was swallowed into the sea. Many of its people were also lost to sea, even the family of Jarl Valdimar. The College of Winterhold was left unscathed, and the Jarl's council insisted on blaming them. Rumors started to spread across the settlement and the then Arch-Mage, Deneth wrote personally to the Jarl to state his case. Deneth claimed that the fact that the college was intact is a testament to the protective magick placed around it many years ago and that they had no involvement in the city's outcome.[5] The city's original seat of power was lost in the Great Collapse and one of the old buildings was repurposed into the Jarl's Longhouse.[8]:478

Despite Deneth's claims, rumors persisted throughout the years and the people slowly left Winterhold until it was nigh a ghost town. By 4E 201, the town was ruled by Jarl Korir and the college's Arch-Mage was Savos Aren. In that same year, the College of Winterhold made an expedition into Saarthal where they discovered the Eye of Magnus, an artifact of immense magical potential. While one of their initiates left to find the Staff of Magnus, the Thalmor agent, Ancano created a powerful barrier around the college's hall of attainment and tampered with the eye. The Arch-Mage and the initiate confronted the agent but were blasted out of the college and magical anomalies spewed onto Winterhold proper.[23] The college took swift action to deal with the anomalies around town and while they mourned the death of the Arch-Mage, the initiate left for the Labyrinthian, where they would find the Staff of Magnus.[24]

See this section in the following article: Winterhold 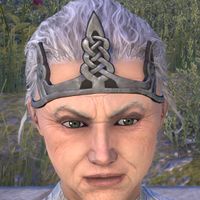 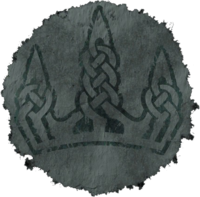 For Nord culture as a whole, see the: Culture section on the Nord page.

The common folk of the Winterhold region are seasoned fishermen that have grown accustomed to the harsh winters and even though the land offers little for grazing, they have managed to make due successfully with food. A staple dish in Winterhold and other Nordic coastal cities is Coastal Clam Chowder, which is made from a combination of nordic barnacle, clams, oysters, and a variety of fish, typically the catch of the day.[25]:93

One of the most lauded pieces of food to come out of the hold is Ghostflesh, their regional cheese dish. The cheese is made from the little supply of dairy they have, it is then smoked over a pile of dried seaweed, and then wrapped into a pastry made from flour and horker's suet. It is then baked to the point that the cheese is molten and steamy and that the crust is light and flaky. Ghostflesh is an ideal snack for Winterhold's fisherfolk while they are out at sea.[10]

The Skald of Winterhold tell the tale of Ahzidal, the first great Nordic enchanter, who spent the rest of his life attaining every bit of arcane knowledge to expand his prowess. He offered his skills to the Five Hundred Companions when they returned to Skyrim and later became a priest in the Dragon Cult, but his quest for knowledge guided him to Oblivion and even madness. Ever since then, he was never seen again, and some say he disappeared into Oblivion, others that he betrayed the cult and was subsequently killed, or that he hid into the depths of ruined Saarthal. In actuality, he fled to the island of Solstheim, where he was sealed into Kolbjorn Barrow with his relics.[26]

The Nords of Winterhold favor six-foot-long axes.[27] Winterhold's symbol, a three-pointed crown was recreated as a small bronze adornment called Anthor's Shadow Crown. It was worn by the master of hidden arcane knowledge in the city and some people even say that it never saw use in anything other than secret meetings, but the Second Era author, Taleon Mythmaker doubts it.[28] Other similar adornments are the Dawn's Eye Crown, which features the eye of Winterhold's college[29] and the Shrouded Crown.[30] The Wolfhounds of Winterhold have lighter and fluffier coats, compared to their cousins in the south. They can even howl a bit like the wolves they chase.[31]