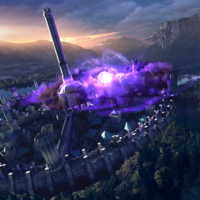 The Soulburst of 2E 578 (or 2E 579) was a massive explosion of arcane energy which sundered the veil between Nirn and Oblivion, and disrupted the connection between the souls of the denizens of Nirn and their mortal hosts. The Elder Scrolls themselves named this event after it was set into motion.[1]

The necromancer Mannimarco had convinced the Cyrodilic Emperor Varen Aquilarios that, despite not being Dragonborn, as all true emperors must be, if they slightly modified the coronation ritual, they would be able to both relight the Dragonfires and convince Akatosh to gift Varen with the blood of a dragon.[2] However, Mannimarco corrupted the Amulet of Kings, and, by performing the ritual, Varen broke the divine covenant of Akatosh and Alessia which protected Nirn from the forces of Oblivion.

As the veil shattered, a wave of magical energy radiated outwards from the Imperial City, and Emperor Aquilarios was lost in the explosion. Mystical aftershocks propagated all across the planet, causing numerous mages in the vicinity of Imperial City to die or go mad while mages in the Heartlands suffered injuries. The event was sensed by the magically sensitive across Tamriel,[3] and the constellation of the Serpent grew so large it dominated the night sky. Nirn became vulnerable to the forces of Oblivion, and Daedra began appearing in greater numbers than ever before. Molag Bal, the Daedric Prince of Domination and Mannimarco's master, seized the opportunity to begin disconnecting the souls of Nirn from their hosts to fuel the Planemeld, an attempt to merge his realm of Coldharbour with Nirn.[4] The Soulburst also frayed the veil between Mundus and Aetherius, causing a rise in the number of ghosts and wraiths across Tamriel. The weakening of the veil also made it easier for necromancers to raise corpses on an unprecedented scale.[3]

The Imperial City Mages Guild was blamed for the explosion and expelled from the city by the Elder Council, with control of the Arcane University given over to the "Fellowship of Anchorites" (a pseudonym for Mannimarco's Worm Cult).[5]