"CHIM. Those who know it can reshape the land. Witness the home of the Red King[1] Once Jungled." —Commentaries on the Mysterium Xarxes, Book Three

CHIM (/tʃɪm/)[2] has been described as the secret syllable of royalty.[3] Many writings have made vague references to it throughout history, but despite its importance, there's a lack of information.[citation needed] It is best understood as a state of being which allows for escape from all known laws and limitations.[UOL 1] It is the process of reaching some sort of epiphany about the nature of the universe and one's place in it, leading to a simultaneous comprehension of the full scope of existence as well as one's own individuality.[UOL 1] CHIM is capitalized because it is from the Ehlnofex language, the language of the Ehlnofey who are believed to have been the progenitors of the modern races.[4][5][UOL 1] It is an ancient sigil connoting 'royalty', 'starlight', and 'high splendor'.[UOL 2] 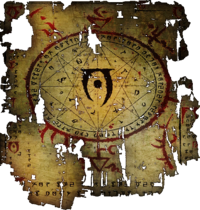 Mankar Camoran's Commentaries on the Mysterium Xarxes, Book Three, begins with "CHIM" in the Daedric alphabet and deals extensively with the topic.[6] It begins with "The Tower touches all the mantles of Heaven [...] and by its apex one can be as he will. More: be as he was and yet changed for all else on that path for those that walk after. This is [...] the secret of how mortals become makers [CHIM[citation needed]], and makers back to mortals."[6] (Though "the secret of how mortals become makers, and makers back to mortals" is a phrase more indicative of the related concept of Amaranth.)[citation needed] So one who knows CHIM is said to reside atop (or within) the Tower (i.e., Mundus).[citation needed] By knowing CHIM, one experiences an ineffable sense of the godhead, which is what allows for escape from all known restrictions.[UOL 2]

The Walking Ways are six interrelated paths to achieving divinity, or "mantling", of which CHIM is the fifth.[7][UOL 1] All paths seem to require some understanding of the Wheel, the structure of the Aurbis.[6][8] According to Vivec, the first to understand the concept was Lorkhan, whose curiosity and desire for change drove him to the rim of the Wheel and beyond, where he looked back at the Aurbis sideways and thereby learned the name of God: I (as a wheel, observed from the side, is an "I").[8][UOL 1] Lorkhan then convinced the Aedra to join him in building Mundus, at the hub of the Wheel, in a venture to help others know CHIM and thereby escape all laws which constrained them.[4][9][10][11][UOL 1] This attempt at CHIM failed, though why it failed has been the subject of intense disagreement and bloodshed from the dawn of creation to the present day.[9][11][12][13][14][15][16][UOL 1] Some attribute the failure to a mistake, others to Lorkhan's malice; the circumstances are unknown, but Vivec seemed to suspect that the so-called failure only occurred so that others might know how not to fail.[9][11][12][UOL 1] Vivec, who wrote extensively on CHIM, described it as reaching heaven by violence.[7][17][UOL 1] He apparently learned of it from Molag Bal.[3]