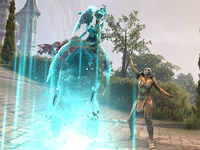 The Wardens are worshippers of Y'ffre and defenders of the Green. They are master storytellers whose nature tales become magical reality.[1][2] Wardens weave spells to cause plants and fungi to grow rapidly. They can also call animals to come to their aid, and wield frost spells to combat their foes.[1]

Wardens are often erroneously assumed to be nothing more than militant Wood Elf priests known as Spinners, though this is far from the truth.[3] Both groups may worship Y'ffre, but Wardens are more than willing to shed the blood of those who seek to harm the wilds.[3] There have been reports of Wardens attacking gangs and even full outposts in retaliation for harm done to Y'ffre's domain. Wardens draw upon the environment to change and shape reality, and cast powerful spells utilizing conjuration or alteration magic, which is again different from their counterparts found in Valenwood.[3] The Wardens as a whole do not bow to any specific organized group or guild.[3]

Wardens are also not typically Bosmer, in spite of misconceptions. Members of all races have been found protecting Tamriel's wilds.[3] They do not follow the Green Pact either (excluding those who are both Warden and Wood Elf), as they're willing to make full use of nature's bounty to survive.[3]. As a matter of fact, one of the only Wardens whose identity has been made public is Boldekh, a Redguard warrior on Nature's behalf who was sent by Vivec to help Naryu Virian assassinate the grandmaster of the Morag Tong.[4]

At some point in history before the Alliance War, a Wayrest blacksmith began to breed bears in honor of a fallen Warden.[5] The Psijic Order created magical gauntlets named after them, suited to the usage of Nature-based magic.[6] In the Second Era, tattoos symbolizing the intertwining of all life forms were popular among those who feel a connection with Nature in Tamriel, including Wardens.[7][8]

Sometime in 2E 582, King Camoran was asked to send Wardens to a valley in the Tenmar mountains, for it to be cleansed of Maarselok's taint.[9]