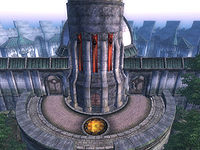 The Arcane University circa 3E 433

The Arcane University (also called the Imperial University) is a walled complex located on City Isle in Cyrodiil. It is a district of the Imperial City, and is connected by bridge to the Arboretum District. It was founded in the Second Era and replaced the Crystal Tower of Summerset Isle as the center of magical learning in Tamriel.[1]

Originally an old Ayleid district adjacent to the Imperial City, the complex was rebuilt as the headquarters of the Mages Guild[2] after the guild's founding in the early Second Era.[3] The Arcane University served as the seat of the Council of Mages and was Tamriel's foremost magical research center, home to many powerful guild mages, scholars, and apprentices.[4]

The university grounds are guarded by Imperial Battlemages, a legion of magic-wielders once trained in the Battlespire.[5] In the center of the district is the Arch-Mage's Tower. The tower contained the Council Chamber, the Arch-Mage's living quarters, and a ground floor open to the public. The chambers were linked by magical teleportation pads. Accessible from the tower was the Imperial Orrery, a reconstructed Dwarven machine used to chart the heavens. The university grounds were divided by a wall; one half of the grounds were reserved for members of the Mages Guild. The university contained a Chironasium for enchanting, a Lustratorium for alchemy, a Praxographical Center for spell making, and quarters and practice rooms for permanent residents. The Mystic Archives had a large collection of books and notes. The grounds also contained an alchemical garden, an outdoors lecture area, and an Imperial watchtower for the Battlemages.[4]

Following the Soulburst of 2E 578 and the disappearance of Emperor Varen Aquilarios, the Mages Guild's legal standing under the Guild Act was revoked and stewardship of the Arcane University was temporarily awarded to Mannimarco's Order of the Black Worm under the name "Fellowship of Anchorites".[6][2] In 2E 582 the exiled Mages Guild re-established a central headquarters on the isle of Eyevea.[7] Following Molag Bal's invasion of the Imperial City and the Worm Cult's fall from power that year, the university was plundered and occupied by Daedra. Remnants of the Dragonguard succeeded in securing the university's most important treasures deep underground.[8] Many of the thousands of Dwarven artifacts (including vamidium constructs) stored in the vaults below the university were smuggled out after the university was sacked, and later appeared on the open market.[9]

With a large hole in the outer wall, the Worm Cult-cursed ruins of the Arcane University were eventually largely abandoned by the occupying Daedra. The Circle of Champions then began using the district to host dangerous gladiator battles to the death. Fighters from all three sides of the Alliance War came to the Arcane University battleground to fight for the glory of the Fire Drakes, Pit Daemons, and Storm Lords arena teams.[10] At some point after the end of the Planemeld, the Mages Guild regained ownership of the university.

Access to the Arcane University underwent a change of policy at the end of the Third Era when Hannibal Traven became Arch-Mage.[11] To gain entry, initiates of the Mages Guild needed a recommendation from all the guildhalls of Cyrodiil. In 3E 433, the Orrery was repaired with Dwemer artifacts imported from Morrowind.[12] The university was not directly affected by the attacks on the Mages Guild from the Order of the Black Worm, although the attendants of Wellspring Cave were slain by the necromancers, cutting off the supply of special wood needed for the creation of magical staffs, and several members of the council of mages based at the university including the Arch-Mage died during the crisis.[4] The Arcane University survived the dissolution of the Mages Guild following the Oblivion Crisis, and was still a center of magical study in 4E 201.[13]