The Forgotten Hero at the Battle of the Red Ring

The Great War, referred to as the First War Against the Empire by the Thalmor,[1] was a war fought from 4E 171 to 175 between the Third Empire and the Third Aldmeri Dominion. The war consisted primarily of a Dominion invasion of Imperial territory, culminating in the capture of the Imperial City before its recapture by the Empire, and the war eventually ended with the Empire signing a punishing peace deal.[2]

After the Oblivion Crisis destabilized Summerset, the Sapiarchs of the Crystal Tower ceded power to the Thalmor and they subsequently seized total control in 4E 22. In 4E 29, the Thalmor took control of Valenwood and Elsweyr in 4E 98.[2]

The Empire of Cyrodiil, on the other hand, became progressively weaker; by the accession of Titus Mede II in 4E 168, the Empire had lost the provinces of Black Marsh, Elsweyr, Valenwood, and Morrowind[3][4]:109[5]:16, and found its province of Hammerfell severely weakened.[2]

In 4E 171, the Thalmor sent an ambassador to the Emperor to demand tributes, land, the disbandment of the Blades and the banning of the Talos cult. The Emperor, despite being advised of the Empire's military weakness, rejected the offer and was met with the heads of every Blades agent in Dominion territory. Thus began the Great War.[2]

Within days of the declaration of war, two Thalmor armies attacked simultaneously. One, led by Lady Arannelya, entered western Cyrodiil from Valenwood, bypassed its cities, and crossed to Hammerfell to join with Dominion attackers landing on its southern coast. The Dominion forces occupied the country, and the Empire retreated across the Alik'r Desert in the March of Thirst.[2] At least one battle took place in southern Hammerfell, as the soldier Angarion was named "Hero of the Battle of Roseguard".[6]

Concurrently, the Thalmor general and Daedra worshipper Lord Naarifin led a force into Cyrodiil from Elsweyr and seized Leyawiin. Continuing to advance in 4E 172, Naarifin seized Anvil and Bravil. By the end of the year, Naarifin had reached the Imperial City. As the Imperial Navy defended the Niben and Lake Rumare, legions from Skyrim joined the Imperial force in early 4E 173. The Dominion, however, crossed the Niben and surrounded the Imperial City on three sides, eventually seizing the city in 4E 174.[2] The Emperor broke out of the city,[2] retreating to Skyrim.[7]

Naarifin's true aim in the Imperial City was to bring about a prophecy entitled "The Culling" with the support of the Dremora blademaster Reive, a servant of Boethiah,[8] who led a cult in support of Naarifin's plan.[9] Naarifin also used the Orb of Vaermina to observe the Imperial army and predict its movements.[10]

In Hammerfell, Lady Arannelya's attempt to join Naarifin's forces had been foiled by General Decianus, who stopped her advance at Skaven. When he joined the Imperial army in Cyrodiil, he discharged much of his army as "invalids" to detain her.[2]

In the winter of 4E 174 and 175, the Emperor regathered his forces for an assault.[2] Having met a Forgotten Hero, and having been incapacitated by an assassin's attack, the Emperor appointed the Hero to lead the battle in his stead and guise.[11] Having breached the city, the Hero personally confronted Lord Naarifin and defeated him, closing the Oblivion gate he had opened to effect the Culling.[12]. The Emperor took the credit,[13] and Lord Naarifin was reportedly kept alive for 33 days until either dying or being "carried off by a winged daedra", the former of which is the accepted story.[2]

During the war, other political factions in Tamriel did not cease activity. In Skyrim, the Reachmen took advantage of the Empire's absence to seize Markarth and the Reach from Nordic control, holding the city for two years.[14] 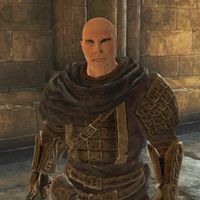 Metundus, a veteran of the War and celebrity gladiator

Titus Mede II, after recapturing the Imperial City, signed the White-Gold Concordat in 4E 175. This peace treaty granted much the same concessions as were demanded by the Thalmor at the beginning of the war, but nonetheless the treaty was signed.[2] Local leaders, such as the kings (or "jarls") of Skyrim, were financially compensated after learning of its terms,[15] but many refused to accept it regardless, eventually causing the Skyrim Civil War.[16] The White-Gold Concordat was especially disliked for its banning of Talos worship,[2][17][18][19] especially by Nords who viewed this as a betrayal[20] despite propaganda produced to promote the Thalmor theology such as The Talos Mistake[21] and Imperial leniency in enforcement.[14] The treaty also entitled Thalmor Justiciars to enforce the theology in the provinces of their own accord, such as the Justiciars Elenwen and Ondolemar.[22][23] Such tensions led to Nordic disapproval of the Empire, which would also come to precipitate the Civil War.[24]

The Concordat also disbanded the Blades in retaliation for past offences.[25] Many, thus, were left to find new purposes; some, such as Delphine[25] and Azzin returned to the organization's Dragonguard roots and hunted Dragons,[26] while others such as The Warrior simply returned to their homes.[27]

The Concordat also ceded much of Southern Hammerfell to the Aldmeri Dominion.[2] The Redguards, however, refused to accept this and fought the Dominion to a standstill over the following five years and eventually signed the Second Treaty of Stros M'Kai.[2]

After the Great War many Legionnaires changed careers. The war hero Martius Silius became a gladiator in the Imperial Arena circuit, along with cohorts from his time in the War.[28] Some Nord veterans of the war such as Galmar Stone-Fist would go on to join Ulfric Stormcloak's rebellion,[29] while others such as Legate Rikke would remain with the Legion to put down the revolt,[30] while yet others simply retired, often proud of the service and keeping their armor as a token thereof.[31][32]