Varen Aquilarios was the son of a Duke of Colovia before becoming Emperor of the Empire of Cyrodiil when he overthrew Leovic, the last of the so-called Longhouse Emperors, after the latter had decriminalized Daedra worship in the Empire.

Varen led an uprising against Leovic that culminated in the storming of the Imperial City; Varen slew Leovic personally in the Imperial Throne Room. He was then crowned Emperor and wed Leovic's widow, Clivia Tharn, to consolidate his rule.

Varen subsequently led a group called the Five Companions on a two-year quest to recover the lost Amulet of Kings, which they eventually located in the ruins of Sancre Tor. Heeding the advice of Mannimarco, Varen planned to use the Amulet in a ritual to persuade Akatosh to make him a Dragonborn and therefore a legitimately-ordained Emperor. In 2E 579, as the ritual was attempted, Mannimarco altered it and triggered the catastrophe known as the Soulburst. Varen vanished in the chaos, and Clivia assumed the Imperial Throne as Empress Regent in his absence, setting Tamriel on a course for the Alliance War. He spent some time with the Moth Priests following the Soulburst, before going to Coldharbour and assisting the Vestige in the latter's quest against Molag Bal.[1]

Varen was born to a Colovian duke in 2E 536,[UOL 1] and later became the Duke of Chorrol.[2] His nephew from an unnamed sibling, Carolus Aquilarios, viewed him as a role model and later become count of Kvatch.[3] When Leovic, third leader of the short-lived Reachman dynasty known as the Longhouse Emperors, assumed the Ruby Throne, he legalized Daedra worship across the Empire. This outraged much of the population, and prompted Varen to spark a rebellion.[4]

Varen left his homefront of the Gold Coast, in the hands of his nephew Carolus. He constructed a massive wall spanning around the Gold Coast, later dubbed "Varen's Wall", in order to protect the region in the event of Leovic's forces arriving.[5][6] 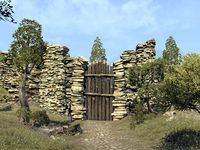 Varen summoned the military forces of the Colovian Highlands. Secretly, he also contacted Elder Council chancellor Abnur Tharn for assistance to depose the Reachmen foreigners from the north. Varen based his rebellion out of the city of Bruma, and subsequently won many victories across Cyrodiil.[4]

In 2E 576, Varen and his army stormed the Imperial City, before breaking into the White-Gold Tower and driving his sword into Leovic's heart at the foot of the Ruby Throne, thus instantly killing him, and immediately declaring himself Emperor. For Abnur's loyalty and assistance in the rebellion, Varen agreed to take Leovic's widow, Clivia Tharn, as his bride.[4] Due to the mass amount of casualties during the uprising, Varen converted the Market District of the Imperial City into the Memorial District, filling it with mass graves.[7]

"By the lighting of the Dragonfires, I claim my rightful lineage! By the fires of creation, let me be reborn! By the will of Akatosh, I proclaim myself… Dragonborn!" –Varen Aquilarios[8]

Varen's rule was largely stable and without problems, but the thought of him being an illegitimate ruler as he was not Dragonborn worried him constantly.

Believing that only a Dragonborn can rightfully take the Ruby Throne, in 2E 577, he formed the Five Companions to find the Amulet of Kings after the Altmer sorcerer Mannimarco convinced him that he knew a ritual that would allow Varen to become Dragonborn. After hearing of this, he set out on a two-year quest to find the Amulet with his Five Companions: Varen himself, the half-giant warrior Lyris Titanborn, the sorcerer Mannimarco, Sai Sahan, a Redguard blademaster and the captain of the Emperor's Dragonguard, and Imperial Battlemage Abnur Tharn.

"Varen Aquilarios, you are no heir to Alessia! You will pay for your sacrilege! The veil between Tamriel and Oblivion tears and splits asunder! ...My master, Molag Bal, is free to claim Tamriel for his own." –Mannimarco[8] 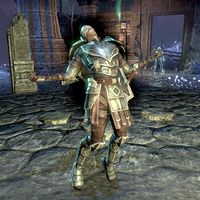 Varen is immobilized by Mannimarco

The Five were able to recover the Amulet by 2E 579 prepared to perform the ritual. They gathered at the Temple of the One in the Imperial City and began to perform the ritual. While Tharn held the Amulet, Varen asked Akatosh to rightfully grant his claim as emperor by making him a Dragonborn. At that moment, Mannimarco immobilized everyone present and revealed his true intentions; he was an agent of Molag Bal, and the ritual did not reignite the Dragonfires, instead tricking them into destroying the ancient barriers shielding Mundus from the forces of Oblivion and thus allowing Molag Bal to begin the Planemeld, a forceful attempt to drag Nirn out of Mundus and into his own realm of Coldharbour. This event was known as the Soulburst, and it shook every corner of Tamriel.[8]

Subsequently, Lyris was captured and brought into Coldharbour. Sai Sahan fled with the Amulet and managed to hide it in Sancre Tor before being captured and held in the Halls of Torment. Mannimarco summoned his Worm Cult and turned the Temple of the One into a sacrificial ground where dozens of souls were harvested and brought to Coldharbour, and Abnur joined him in order to gain his trust and spy on him. Varen, however, disappeared.[8]

Time with the Moth PriestsEdit

"The Scrolls allowed me to glimpse the very fabric of reality, but each profound insight dimmed my vision and eventually left me permanently blinded to the light of the world." –Varen Aquilarios

After the Soulburst, Varen woke up weak and near death at the Abbey of the Moth Priests, suffering from amnesia and no longer remembering his role as Emperor. The Moth priests took pity on him, assuming he was a lost vagabond, and gave him shelter within their establishment.

It was there where he set his eyes on the Elder Scrolls, mysterious artifacts of immense knowledge and power. He began to study and read the scrolls in order to learn the events of Tamriel which have happened and have yet to happen, including his life as Emperor and his destiny with the Vestige. The priests were shocked to discover how quickly he managed to read the scrolls, believing it to be a prophetic sign from the Eight Divines. As a result of continuously reading the scrolls, Varen gradually lost his eyesight. He carved himself a staff which he also used as a walking stick. Though blind, Varen still continued to study the scrolls in his mind's eye, and foresaw the events to come in Tamriel's future.

Word of Varen's prophecies began spreading across the land, eventually reaching the Imperial City. When Mannimarco discovered this, he had the Prophet arrested under the grounds of rumor-mongering and treason. The King of Worms had the abbey and its contents burned to the ground, and transferred Varen into the custody of his Daedric master, Molag Bal. Bal then unleashed the Planemeld upon Nirn, and had Varen imprisoned in The Wailing Prison.