Magical Transportation is performed primarily by means of teleportation magic. Such forms of magic fall under many different schools, including Mysticism, Conjuration, and Thaumaturgy. Teleportation can occur via spell or via any of the other more stable methods listed below. 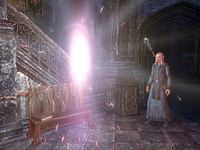 Skilled mages can use portal magic to travel across Tamriel, even bypassing major obstacles, both man-made or natural.[1] However, the performer must know exactly where to generate the portals or he will face catastrophic consequences. This is, the mage must have been there or, at least, see clearly where the portal will spawn.[2][3] Portal seeds are a common component in apprentice-level portal creation.[4]

Before its disbandment, the Mages Guild offered instant transportation between their main halls for a small fee. This service was available to members and non-members alike, though members are generally given a significant discount.[5]

Besides the Mages Guild, both the Tribunal Temple and the Church of the Nine offered teleportation spots in their shrines for those with the skills to use the relevant spells or the money to buy the related scrolls. This kind of teleportation used magic derived from the Tribunal or the Nine Divines, respectively.[6][7]

The Dragon Cult constructed a special portal to Sovngarde at the temple of Skuldafn, which was used by Alduin. It is activated by a special staff entrusted to a Dragon Priest that guards the portal.[8]

The vampire Valerica of the Volkihar Clan, created a portal to the Soul Cairn using finely ground bone meal, purified void salts, and soul gem shards, which have to be placed in a silver-lined portal vessel, blood then needs to be added to this vessel to act as a reacting agent.[9]

In the Western Reach, there are transportation pads near the small village of Snowline.

The Battlespire, had a magical transport vessel called the Star Galley, which was constructed by Imperial Battlemage and Artificer Clarentavious Valisious, it gave access to the other college sections. The vessel was normally kept in the Star Galley Crib. The Battlespire was also connected to the Pillar of Light on Tamriel, which when entered would arrive at the Weir Gate in the Battlespire.

Frostcrag Spire has teleportation pads to every Mages Guild hall in Cyrodiil, which were created by Arch-Mage Taris Rendil.[10]

In Stormhold prison, there are warp pads scattered about that can transport the user back to Helga in the Dungeon Camp.[11] Additionally, some of the crystals found in its tunnels are capable of the same effect when activated, becoming inert after one use.[12]

In the wilds surrounding Dawnstar, there are warp runes that can be stood upon that transport the user back to Dawnstar.[13] Additionally, some runes can be carried and used to achieve the same effect, but only once.[14]

The ancient Dunmer fortresses around Vvardenfell are connected by magical means, such that anyone carrying the correct Propylon Indices can jump instantly from one to the next around the loop. Only one index exists for each fortress, however, and most have been lost over time as the forts have been abandoned by their creators.[15]

The Redguards have their own form of teleportation magic as illustrated with Arlimahera's Altar, a device created by the eponymous queen of Hammerfell, who used it as an escape device from her own fortress in Bangkorai. It requires the use of two Yokudan runestones.[16]

The Montalion clan of vampires located in the Iliac Bay have an affinity for teleporation.[17]

A Gate to Oblivion

The Barsaebic Ayleids had a realm of nexus gates which acted as portal pathways, called the Eld Angavar.

The Khajiit have portals called moon gates, a well-known one is the Moon Gate of Anequina, which when attuned through a proper ritual can teleport one to Jode.[18]

Mehrunes Dagon uses Oblivion Gates to invade Tamriel through the use of Daedra, however, the Gates can also be entered to access The Deadlands. These Gates are held open by a Sigil Stone.

One way of gaining access to the Soul Cairn is using the Voidgate in the Battlespire, which required a void guide to be activated.[19]

A Shift Gate is known to exist in the Imperial City Prison, and was used by the Eternal Champion.[20]

The College of Sapiarchs uses a large portal at the highest level of Lillandril to transport people from the main island to the college located across the waters. It is guarded by the Portal Master and it sits atop of a large dias.[21] 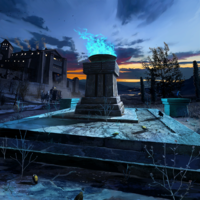 During the Alliance War, the three alliances established individual Transitus Networks in Cyrodiil, a form of teleportation magic involving the maintenance of lit braziers. This temporary teleportation network allowed troops to instantaneously travel between keeps and outposts, although the networks seemingly had limited range and required constant maintenance by groups of mages when pushing deeper into enemy territory.[22][23][24] Transitus Networks are made up of small stone shrines, which glow with a cold blue flame when active.[25] Although similar in appearance, they are unrelated to the ancient wayshrines, which can only be utilized for teleportation by exceptional individuals.[26]