Coldharbour is a realm of Oblivion created and ruled over by Molag Bal, the Daedric Prince of Domination. As befits his sphere, Bal's realm is a desolate, apocalyptic image of Nirn, which is achieved by both mocking imitation and outright theft of parts of the mortal realm. It is inhabited by Daedra and the eternally-tormented husks of mortals called Soul Shriven.[1] Mortals who made deals with Molag Bal can also be found living in Coldharbour.[2][3] The souls of vampires are sent to Coldharbour when they die.[4][5][6] Coldharbour has been described as a manifestation of fear and exploitation.[7] Descriptions of the plane vary widely, but all accounts agree that Coldharbour is a dismal, cold, and largely lifeless realm.[1]

Rada al-Saran of the Gray Host sought a way to pull the souls of vampires out of Coldharbour.[8][9] This was one stepping stone in his quest to break Molag Bal's hold over vampires, which he believed would bring salvation to his kind.[10] He eventually found a way to bring souls back from Coldharbour through harrowstorms.[11]

During the time of the Ayleids, the city-state of Abagarlas worshiped Molag Bal and was gifted with a great weapon, the Mortuum Vivicus.[12] However, the citizens of Delodiil preemptively attacked, and Bal was forced to withdraw the Vivicus to the Halls of Submission in Coldharbour.[13][14]

One of Mannimarco's old cohorts, Vastarie, stole the first black soul gems used by the King of Worms from Coldharbour.[15] Mannimarco believed that the secret to "trapping souls as one might capture lesser Daedra" was being held by Molag Bal, so with all her youthful courage, Vastarie braved the ashen wastes and carried out the heist as her fellow necromancers held open a portal for her.[15] The small black gems she brought back to Nirn furthered Mannimarco's quest for power and advanced the study of necromancy as it is known to mortal-kind.[15]

Circa 1E 2260, a portal to Coldharbour was opened when the All Flags Navy collapsed the Coral Tower of Thras.[16] Several ships were pulled into the realm, and the Maelstrom of Bal remained as a link between Coldharbour and Mundus.[16] Sotha Sil journeyed to Coldharbour in 1E 2920 to bargain with Molag Bal.[17] The mage Morian Zenas famously visited the realm during his voyages through Oblivion, and wept at the sight of the desolation.[18]

At some point, a group of Mehrunes Dagon's followers toiled as slaves to Molag Bal and his overseers in Coldharbour. These true believers in Dagon would draw upon Dagon's fire to help them survive the torment. Not expecting to escape Coldharbour, they would plot and scheme to thwart Molag Bal and his minions whenever they could Mehrunes Dagon would reward those who believed in him with the means of producing a powerful explosion that would rattle Coldharbour and remove the instruments of torture from the Daedric overseers. Mehrunes Dagon then manifested a projection of himself in the mountains of Coldharbour above the enslaved mortals and their Daedric captor and did battle with Molag Bal. Though Dagon was not able to defeat Molag Bal with just a projection, he was able to free the souls of his followers from Molag Bal's torment and take their souls to the Deadlands.[19]

The most significant interaction between Nirn and Coldharbour was Molag Bal's attempted Planemeld in the mid-Second Era. In 2E 579, as the Interregnum dragged on and the Dragonfires remained unlit, Molag Bal's minion Mannimarco deceived Emperor Varen Aquilarios into using the Amulet of Kings to initiate a ritual that triggered the Soulburst.[20] The ancient covenant between mortals and Akatosh was broken, and Nirn was set adrift in the Mundus,[21] rendering it vulnerable to Daedric incursions. Molag Bal began deploying machines known as Dark Anchors to pull Nirn into Coldharbour, and sought to merge the two realms into one.[22]

In 2E 582, Aquilarios was freed from his imprisonment in Coldharbour and returned to Tamriel in an attempt to fulfill a prophecy of the Elder Scrolls, which had revealed to him that a Soul Shriven hero named the Vestige would stop Molag Bal's plans.[23] With Varen's help, the Vestige reassembled the Five Companions (sans Mannimarco) in secret, recovering the Amulet of Kings and exposing Mannimarco's plot to mantle Molag Bal's godhead.[24] Vanus Galerion, concerned by Molag Bal's growing influence on Tamriel, called for a council between the three leaders of the Alliance War to discuss a possible invasion of Coldharbour.[25] Although the alliances were unwilling to provide aid, the leaders gave their blessing for the neutral Fighters Guild and Mages Guild to mount an invasion force.[25] 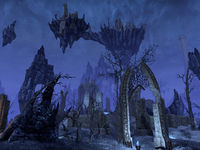 The Tamrielic invaders were initially thwarted by Coldharbour's defenses, being scattered all across the realm after entering a portal. The Daedric Prince Meridia, an ancient enemy of Bal, opened the doors of her stronghold in the realm—the Hollow City—as a safe haven for the scattered invaders.[26] After destroying the Great Shackle and assembling allies from all across Coldharbour,[27] the Army of Meridia made a final assault on the Endless Stair, where they successfully collapsed the Planar Vortex between Mundus and Coldharbour, foiling the Planemeld.[28] Following his defeat, Molag Bal retreated to Heart's Grief, when Aquilarios chose that moment to strike.[29] Using the Amulet of Kings, the Vestige was blessed with the power of the Eight Divines, with which Bal was banished to the Void in his own realm. Following this, the Prince lost possession of all mortal souls he had captured.[30]

That same year, the Fighters Guild was manipulated by Meridia to thwart Bal's plans to return the Mortuum Vivicus to Tamriel, and the Vivicus was ultimately destroyed.[14] Also that year, Abagandra—the Lightless Remnant of the Doomcrag—was given to Bal and transported to Coldharbour to prevent it devastating the Tamrielic region of Rivenspire.[31] 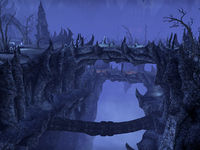 Coldharbour supposedly emulates an apocalyptic version of Nirn, including a defiled copy of the White-Gold Tower.[18] It is unnaturally cold, even with magical resistance, and ancient, blackened ruins fill the landscape.[18] The ground is sometimes described as a barely-traversable sludge.[18] Even the air assaults the senses, changing rapidly from the stench of rancid death to the sweet aroma of flowered perfume.[17] The landscape itself is made up of craggy, floating islands of blackened rocks that are covered in a blue lichen,[32] hovering in the void.[33] Notably, the realm has an abundance of Azure Plasm, a type of chaotic creatia that resembles lakes of icy cold water.[33] The plane is divided into three main regions: the Shrouded Plain, the Black Garrison, and the Fist of Stone.[33] Other important features include the Chasm, a gap between islands that surrounds the Fist of Stone, and the Hollow City of Meridia, which remains outside Bal's influence.[26][33]

Although unsuccessful, the Planemeld had a significant impact on Coldharbour. Molag Bal struck a deal with the Mad Architect to construct the Endless Stair and the Planar Vortex, as well as a labyrinthine structure known as the Vaults of Madness.[34][35] The Great Shackle was built as a mooring for the Dark Anchors, and the Wailing Prison was established to hold the vast number of Soul Shriven being sacrificed to Bal. The Castle of the Worm served as the headquarters of the Worm Cult for a time. Some parts of Tamriel were successfully ripped into Oblivion, forming pocket realms such as the Village of the Lost that were intended to be integrated into Coldharbour proper.

The realm is home to a multitude of Daedra. Included among them are the Cold-Flame Atronachs from the Fourth Sinus of Takubar, the gargantuan Daedric Titans, the Harvesters, and the pesky Banekin. The realm has two major clans of Dremora, the Deathbringer Clan and the Foolkillers Clan, who vie for dominance.

As well as the Daedra, many of the realm's inhabitants come from Mundus. The majority of the mortals are Soul Shriven, whose souls belong to Molag Bal and whose bodies are animated with a Daedric vestige in their stead. They live a life of eternal torment, cursed to slowly wither away without their soul only to be reborn. They are used for labor or amusement and eventually lose all sense of self. Some of the Shriven become consumed with hunger and turn feral, eating everything they come across—including lesser Daedra and each other. Other mortals live in isolated settlements for various different reasons, such as the Shadow Walkers of the Moonless Walk and the Argonians of Haj Uxith. Some species of flora and fauna even seem to thrive in the realm, including netch, bantam guar, scuttlers, and various species of fish.

The realm possesses several qualities that function as security measures. Mages who attempt to enter Coldharbour by the way of portals will find themselves in a location they did not intend to end up at.[36] It doesn't matter if the mage knows where they want to go or not, all unauthorized portals leading into Coldharbour will leave foreign troops or entities scattered every which way and hopelessly lost.[36] This makes it difficult to gather forces to invade, as Vanus Galerion's Coldharbour invasion force learned while attempting to halt the Planemeld in 2E 582.[37] The invasion force was separated after entering the portals opened by the Mages Guild, and many troops were lost to the wilds of Coldharbour or abducted by the minions of Molag Bal.[37] Magical constructs known as Coldharbour Sentinels are used by Molag Bal to guide his vision in Coldharbour. With their aid, he can see into whatever prison they're anchored in. These Sentinels are magically connected, so destroying one will blind the other Sentinels it was bound to. Several of these constructs were present in the Wailing Prison during the Vestige's fateful escape.[38]

Coldharbour is full of innumerable facilities, all built to further Molag Bal's dark schemes. Among these facilities is the Library of Dusk, a library filled with propaganda, or "the truth according to Molag Bal".[39] The Library of Dusk is available for use by the Prince's minions, but also serves as a trap for scholars who happen upon the plane.[40][41] There is another library in Coldharbour that is slightly less accessible. It is Molag Bal's personal collection, located in his stronghold. The shelves in Molag Bal's library span entire cliffs and run deep into a chasm. Unsurprisingly, plenty of the books on his shelves are very disturbing.[42]

The plane mostly consists of prisons, but other facilities include those where research is conducted. The aforementioned Vile Laboratory is one such place. There, Molag Bal has had experiments conducted on souls[43] and vestigial hybridization.[44] He is fascinated by the metamagical technology of Soul Gems, and often has a mystical research project or two in the works to develop new and more efficient methods of stealing and imprisoning the souls of mortals.[45] Not every part of Coldharbour serves a practical use. There are a lot of graveyards in Molag Bal's plane of Oblivion for no other reason than because he likes them.[46]

The Black Forge
The facility where many of the tools for Molag Bal's schemes are fabricated.
Castle of the Worm
The Worm Cult's headquarters in Coldharbour.
The Endless Stair
The headquarters of the Planemeld.
Haj Uxith
An Argonian village.
Heart's Grief
Molag Bal's palace.
The Hollow City
A city of Meridia in the center of Coldharbour.
The Moonless Walk
A lost Valenwood forest.
The Orchard
A large cemetery in Coldharbour, containing a coven of vampires.
Vaults of Madness
A labyrinthine structure.
The Vile Laboratory
A laboratory that emulates a Dwemer ruin.
The Wailing Prison
Where the fateful events that lead to the end of the Planemeld first began.