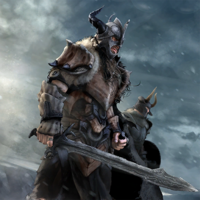 The following is a list of all known wars and conflicts during the Merethic Era. Due to the limitation of sources, the order of events is approximate and should not be taken as necessarily chronological.

During periods of rapid Nedic advancement in metal and stonecraft, conflicts between the Iron Orcs and Nedes of Craglorn became more common and intense. This resulted in a fundamental rearrangement of Iron Orc civilization. From a largely peaceful, shamanistic society into a community of miners, smiths, and warriors.

The Night of Tears (also known as the Crying Night) is the night an Elven force attacked and burned the first human city of Skyrim, Saarthal, built by the first Nordic inhabitants. In retaliation, Ysgramor, the leader of the human colonization effort and the founder of the Companions, drove the elves out of Solstheim and Skyrim.

According to legend, the only humans to survive the Night of Tears was Ysgramor and his two sons, who fled back to Atmora. It's there they gathered the famed Five Hundred Companions and sailed back to Skyrim to slaughter any Elves they came across, founding new cities as they went and clearing the way for new settlers. 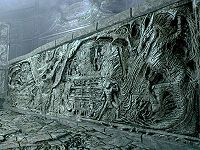 The dragon priests in Tamriel became more tyrannical and the populace eventually rebelled some time in the Merethic Era, leading to the Dragon War. Some dragons turned against their own kind and taught the Nords powerful magic that allowed them to turn the tide of the war in their favor. After a long and bloody campaign, the rule of the dragons was ended, and the remaining wyrms fled to remote areas.

A little-known war in ancient Skyrim.[1]

The Na-Totambu, the royalty of the Yokudans, fight to a standstill among themselves to decide who will lead the charge against the Lefthanded Elves. Leki intervenes and a victor emerges. Diagna, an avatar of the HoonDing, brings orichalc weapons to the Yokudans, which prove instrumental in defeating the elves.[2] 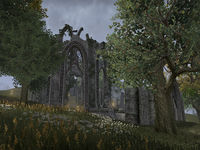 A centuries long civil war between the more conservative Aedra-worshiping Ayleid clans and the more decadent, vigorous clans that had adopted Daedra-worship begins.[3]