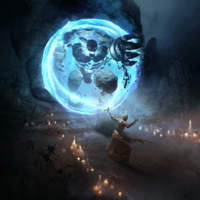 Conjuration of a Storm Atronach

Conjuration magic is the art of summoning creatures or items from another plane. It is one of the six colleges of Magic, but is not considered to be one of the "great schools" by the Mages Guild.[1] and only became mainstream after Warp in the West. Despite this, it has been practiced for centuries by witch covens and wizards throughout Tamriel. Clan Direnni's sorcerers were some of the first to formalize the rituals, chants, and incantations used to open a connection with the plane of Oblivion, many of which are still standard centuries later.[2]

This school can be used to summon a wide range of daedric creatures, weapons and armor. Spells used to dominate creatures and humanoids were once considered to be part of this school, but they are now part of the college of Illusion. A further type of spell grants power over the undead, until those were reassigned to the school of Restoration.

In 3E 431, the Council of Mages decided that Conjuration magic in Cyrodiil was to become the responsibility of the guildhall in the town of Chorrol.[1]

Some conjuration practices utilize parts of the creature, such as Daedra skin for summoning Daedra. Scrolls of summoning are always based on the Law of Similarity. Milyn Faram devised techniques that allow to conjure Daedra with scrolls that only have an image of the Daedra. They were noted to yield almost as good results as the techniques that required parts of a Daedra for conjuration. His research was based on Dwemer machinery.[3]