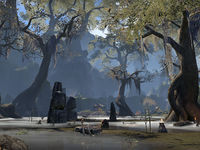 The tar-pits of Ouze, believed by some to connect with the Ooze

The Ooze is a Bosmeri term that refers to the formless chaos that existed prior to Y'ffre's Naming. According to legend, Y'ffre would shape the Ooze into all of creation by telling their stories. Even after creating the Green, the Bosmer, and the rest of life, though, some formless nothing still remained. Y'ffre decided to speak one final story to give the Ooze purpose, saying that any being who violated their Green Pact with the Valenwood would be cast into the Ooze and stricken from the story of Tamriel.[1]

Most Bosmer recognize the Ooze to be a sort of 'spiritual prison' for Oathbreakers who disobeyed some aspect of the Green Pact.[2] These individuals would be shunned by Y'ffre, who represents the living moment[3], and their spirits would be tied to their remains for eternity. These Oathbreakers could only play witness to all the transpires on Nirn and beyond, and were unable to participate or interact with Nirn in any meaningful way, stuck in a purgatorial state for all time.[2][4] The rules that dictate whether someone will be trapped in the Ooze upon death are harsh, but clear. The moment someone breaks the Green Pact or otherwise displeases Y'ffre, no matter how inconsequential or accidental their crime, their soul will be bound for the Ooze.[5] This fate can even be extended to outside intruders in the Valenwood under certain circumstances. [6] Those trapped in the Ooze, however, are not without help. Spinners have been known to communicate with the remains of those who rest in the Ooze and even free them if they so choose.[2] Additionally, Bosmer in the Ooze are still bound to Bosmeri customs, and invoking one such as the Rite of Theft can grant complete control over the Oathbreakers, allowing even for someone to command them to be freed from the Ooze. [7]

Many believe the tar-pits of Ouze to be a physical connection to the Ooze, and as such many of the early Oathbreakers were brought here to be buried[8], sometimes alive, and protected until the 'time of renewal' when they will supposedly be freed from both Ouze and the Ooze, and rejoin the rest of the Bosmer[9]. Here, those cast into the Ooze had more agency than those scattered throughout Valenwood, some seeming to even enjoy their restful state. Certain Oathbreakers at Ouze would choose to act as conduits between the resting dead and the Spinners[6], while others, such as Guardian Celonron used their shapeshifting prowess to protect the area from intruders who would disturb their rest.[10]