House Dres is an agrarian agricultural society, and its large saltrice plantations rely completely on slave labor for their economic viability. Always firm Temple supporters, House Dres is hostile to Imperial law and culture, and in particular opposed to any attempts to limit the institution of slavery. – Great Houses of Morrowind

House Dres is one of the Great Houses of Morrowind, with presence only on the mainland. It governed the Dres District of southeastern Morrowind from its ancestral capital city of Tear. The district included parts of the fertile Deshaan plain, and bordered the Indoril District, Hlaalu District, and the swamps and marshes of the Black Marsh regions of Shadowfen and Thornmarsh.[1][2] In the mid-Second Era, House Dres also controlled the cities of Ebonheart and Kragenmoor in central Morrowind.[3] House Dres has never claimed land on the island of Vvardenfell, though ancestral tombs for Dres families may still be found on the isle. Among them is the ancient Dreloth clan, a cadet branch of the Great House.[4] It was formally established as a Great House before the middle of the First Era by Grandmaster Thalthil Dres after a slave-raid over Thorn.[5][6][7]

The Dres had a mainly rural but still very wealthy agrarian agricultural society, maintaining vast saltrice plantations on the plains and marshes surrounding Tear.[1] The Dres were also the Dunmer who shipped the majority of slaves to the other Great Houses, keeping thousands of captives, mostly Argonians and Khajiit in their infamous slave-pens of Tear and the surrounding plantations.[2]

Saint Llothis the Pious is the patron saint of House Dres.[8]

"The isolationist stance of House Dres was instilled in its customs and world outlook from the very beginning. Not only do we consider the other cultures and races to be inferior to the Dunmer, we deem any extended contact with them where we were not in total control to present a danger to Dunmer society. Ideas, like a plague, can spread without warning and prove to be impossible to contain. Instead, we should concentrate on inter-House relations and improving the position of the Dunmer to make our society stronger and eternal." – Understanding House Dres

House Dres was founded in ancient times, formally established after a successful slave-raid on Thorn by Grandmaster Thalthil Dres. The House has existed since the time of the Chimer and the First Council. By the 84th year of the Golden Peace, the Dres had already built their fortune on saltrice plantations and slave labor. They prided themselves on maintaining a persistent tradition of Daedra worship and ancestor reverence. According to Grand Historian Solamar Dres, the isolationist stance of House Dres was instilled in its customs and world outlook from the very beginning.[6] It is said in Vivec's Sermons that the Chimeri hero, Dres Khizumet-e fought against the Nords in the Conquest of Morrowind during the Skyrim Conquests in the early-First Era. He was devoured by the demon chieftain, CHEMUA and his spirit was sent to assassinate the Hortator, but it failed.[9]

Like the rest of the Great Houses, House Dres participated in the Battle of Red Mountain during the War of the First Council under the leadership of Hortator Indoril Nerevar around 1E 700.[10]

House Dres claimed that their agricultural might fed Morrowind, providing the majority of the foodstuffs necessary for the existence and continuation of Dunmer society. The House's vast wealth was drawn from this agricultural dominance, supplemented "nicely" by their control of the slave trade. They believed that the Dunmer should concentrate on inter-House relations and improving the position of Morrowind, in an effort "to make our society stronger and eternal."[6] They have been at the forefront of the Dunmeri slave trade since the middle of the First Era.[7]

House Dres adopted the linked chains of a slave's manacles as their heraldry, referencing their dominance of the slave trade. They likewise adopted the color grey as a designation.[11][7]

In the middle of the First Era, the burial crypts of the noble Dres family were excavated beneath the city of Kragenmoor by Argonian and Khajiiti slaves.[12]

Great House Dres' role during the eighty-year Four-Score War against the Second Empire is unknown. 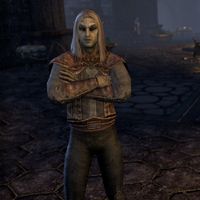 "To spread culture and truth to the benighted: this is our commitment and burden." — Mottos of the Dunmeri Great Houses

During the Second Era, House Dres controlled the city of Kragenmoor in Stonefalls, where Grandmaster Omin Dres, leader of the House in the mid-Second Era, resided as of 2E 582. Dres Councilman Drathus Othral ruled Ebonheart on the Dres' behalf, though Redoran, Hlaalu, and Indoril also held significant influence in the city. The House also maintained plantations around the capital of Mournhold.[3] Despite the opulence and wealth of Dres nobles, thieves around this time feared the Great House, encapsulated by the popular mantra of "Don't cross the Dres." Dres justice was rumored to not bother with Ordinators or local guardsmen.[13]

In 2E 559, a dispute over a House Hlaalu trading post in contested territory erupted into an armed conflict known as the War of Two houses. The so-called "war" consisted of only one battle, fought by House Dres mercenaries and House Hlaalu guards at the trading post. Despite outnumbering the Hlaalu five-to-one, the conflict ended with a decisive House Hlaalu victory when the leader of the Hlaalu guards, Purilla Falen, defended a portal that allowed a full cohort of Hlaalu battle-merchants to swarm the Dres mercenaries.[14]

Shortly before the Second Akaviri Invasion in 2E 572, Councilman Glathis Dres was murdered by his Argonian slave, Heita-Meen, who would go on to lead the force of Argonian Shellbacks at the battle of Vivec's Antlers.[15] After the defeat of Ada'Soom Dir-Kamal's Akaviri forces, the Ebonheart Pact was signed. In recognition for their assistance, the Great Houses of Morrowind (with the exception of House Telvanni) liberated their slaves. However, House Dres continued to unofficially maintain their slave-holding ways.[16] The Dres were noted for their "persistent slander and calumny" towards the Ebonheart Pact in the years that followed. Nevertheless, they nominally remained loyal to the alliance and all it stood for, not 'officially' condoning the perpetuation of slavery within the areas they administrated.[UOL 1] After the eruption of the War of the Three Banners in 2E 580, House Dres' warriors would be among those that fought for control of Cyrodiil and the White-Gold Tower.[3]

During the Daggerfall Covenant's invasion of Stonefalls in 2E 582, House Dres struggled to maintain order in Ebonheart.[17] In Kragenmoor, a grief-stricken Tanval Indoril's Vanguard marched on Kragenmoor and took Grandmaster Omin's son Sen hostage, in exchange for access to the peak of Tormented Spire and the Brother of Strife, Sadal. The Vestige's arrival in the city shortly afterwards saw Sen Dres released.[18] At the behest of Grandmaster Omin, the Vestige proceeded to slaughter the remaining Indoril Vanguard in retaliation for their transgressions.[19] In Deshaan, Houses Dres and Hlaalu clashed around the ruins of Mzithumz,[20] while Dres members unwittingly furthered the agenda of the Maulborn Cult in Mournhold.[21] Bounty Hunters in the employ of House Dres during this time were presented with writs of arrest that authorized them as an agent of the Dres commissioned by the Hortator of the Great House to re-acquire "live property." Said agents were fully authorized to distribute appropriate compensation to any guard command willing to allow the agent to go about the business of the re-acquisition of missing "property" without hindrance.[22]

At some point after 2E 850 and before 2E 864, the Khajiit S'rathra funded a raid on a slave camp near Tear with his own wealth, with the objective to liberate Khajiiti slaves from the camp. Among the participants of the raid was the famed Redguard hero, Cyrus. [23]

In the late Second Era, Tiber Septim's legions turned their eyes towards Morrowind. Following House Indoril's lead, House Dres and House Redoran swore to resist the western invaders to the death. However, the Dres and Indoril advocated allowing the western invaders to enter the interior of Morrowind, where they'd battle them via a guerrilla war. With the Redoran manning the western borders alone, the Telvanni remaining neutral, and the Hlaalu advocating accommodation, Morrowind was disunited. When Vivec signed the Armistice after only a handful of skirmishes, House Dres grudgingly bowed to the will of the Tribunal, but only with strong provisions protecting slavery.[24]

House Dres lost most of their support from their traditional allies when the members of House Indoril began to commit suicide after the Armistice was signed. They remained hostile to Imperial culture throughout the Third Era, and in particular refuted any attempts to limit the institution of slavery.[1] Further complicating matters was the loss of both Ebonheart and Kragenmoor to House Hlaalu rule during the Third Era.[UOL 2][UOL 3]

In 3E 396, during the Imperial Simulacrum of Jagar Tharn, a slave revolt was instigated by Argonian rebels in the Dres District after a Dunmeri merchant named Roris was brutally tortured to death for refusing to renounce his faith in the Tribunal. This escalated until the swampy plains erupted in blood and fire, with a full-scale conflict between Morrowind and Black Marsh brewing. The Arnesian War formally began when news of Roris' death reached the rest of Morrowind. The Dunmer's armies ultimately defeated the Argonians and expanded Morrowind's territory to the south.[25]

Due to a lack of holdings in Vvardenfell, House Dres was entirely removed from the events that saw the rise of the Nerevarine, the destruction of Dagoth Ur and the Heart of Lorkhan, the end of the Blight, and the downfall of the Tribunal Temple in 3E 427.[26]

By the year 3E 432, it was said that House Dres had changed their approach to the changing times, and begun to embrace the arrival of new traditions alongside the return of the old. As a result, the Great House appeared to be on the rise.[25]

In 3E 433, rumors circulating in the province of Cyrodiil suggested that House Dres had finally accepted Imperial rule and renounced the slave trade. The House sought new allies in King Hlaalu Helseth and Great House Hlaalu, whom were now the dominant power in the land. Further rumors suggested the alliance between House Dres and House Hlaalu went on to pick apart "the carcass of ruined Indoril" together. The truth of these rumors, or the outcome of the alliance, is unknown.[27]

Shortly afterwards that same year, the Empire withdrew from Morrowind during and in the aftermath of the Oblivion Crisis.[28] It is unknown how House Dres weathered the events of the Crisis, or what became of their newly-forged alliance with House Hlaalu after the latter's loss of influence and Great House status.

"They cut a bloody swath across most of the southern region of Morrowind. Nobody seems certain why it happened... an attempt at expansion, revenge for the enslavement of their people or perhaps both. Whatever the case may be, thousands of Dunmer needlessly lost their lives and many more were exiled from their homeland." – Adril Arano

In 4E 5, the eruption of Red Mountain sent tremors throughout Morrowind. The Dres lands near the marshy border regions suddenly became submerged, having been engulfed by the swamps. The southern wall of Tear collapsed as a result.[29] Following the Red Year, the Argonians of Black Marsh invaded Morrowind and ravaged the southern and eastern reaches of the land before being stopped and expelled.[28] While it is not clear whether the invasion was an attempt at expansion or revenge for the enslavement of their people, the Dres District was the most southerly region and the home of their former slave-masters. It would have been the first area they laid siege to, and where the most personal prejudice would have played a role. While House Dres still sits on the Grand Council of Morrowind and is thus known to have survived the calamities in some form, the modern-day status of the House and its holdings is unknown.