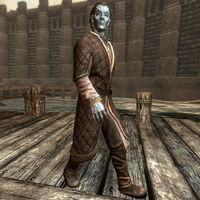 Adril Arano is the Dunmer who greets you when you arrive at Raven Rock for the first time. As Second Councilor of Raven Rock, he is the dedicated servant of Councilor Morvayn, House Redoran's representative and ruler of Solstheim. His duties are to support Morvayn, ensure his rule is enforced, and to take responsibility for the security of Raven Rock. Adril's wife is Cindiri.

Though married, he sleeps in a single bed in Councilor Morvayn's chambers within Morvayn Manor. He has breakfast with Morvayn and Cindiri in the manor, then takes a seat by the Councilor until 1pm. He then walks around Raven Rock's town square until 5pm, when he returns to his seat by Morvayn. He and his wife leave again at 8pm and they have dinner at the Retching Netch until midnight.

Adril carries an elven dagger, a key to Morvayn Manor, and a selection of upper class items and gold.

When you meet him for the first time upon arriving in Raven Rock, he sternly greets you with "I don't recognize you, so I'll assume this is your first visit to Raven Rock, outlander. State your intentions." Depending on quest actions, you are given two or three options to reply to him.

If you have already started the quest Dragonborn, you can ask him if he knows someone named Miraak, to which he will reply, "Miraak... I... I'm not sure that I do." Regardless of quest actions, another dialogue option is to tell him you are just looking for work. He'll respond, "You've picked one of the worst places in Morrowind to do that, but suit yourself." A third option is to tell him to mind his own business, which will result in the response, "That's the kind of attitude that's going to land you in prison, but I'll let it go for now." Regardless of which option you choose, he finishes with "Just remember, Raven Rock is sovereign territory of House Redoran. This is Morrowind, not Skyrim. While you're here you will be expected to abide by our laws.", before striking up a conversation with Gjalund Salt-Sage.

He can be questioned about a few other topics if spoken to after this initial meeting. Asking him about Miraak again will prompt him to say, "I... I'm unsure. I swear I know the name, but cannot place it." Pressing him further he reveals, "I don't think so. I'm not... The name has something to do with the Earth Stone, I think. But I'm not sure what."

Asking if Raven Rock is purely a Dunmer settlement, he explains, "Raven Rock started out as an Imperial settlement, but the Empire decided to abandon it just as my people were first setting foot here. They left the town a shambles... but when House Redoran took over, we turned it around and it became ours. And even if it's been a struggle to make this island livable, we're proud to call it home."

Inquiring about why he is so suspicious of visitors, he reveals, "I have to be. As Second Councilor, the security of Raven Rock is my primary concern." Asking him if security has been an issue he explains further, "This isn't exactly the city of Blacklight. We're on the frontier out here, and we've had more than a fair share of troubles. After all we've been through together, I refuse to let Councilor Morvayn down." Questioning about what his titles mean, he says, "Councilor Morvayn is House Redoran's representative on Solstheim. As second councilor, it's my job to support him and make certain his rule is enforced."

When asked about the city of Blacklight, he explains, "Your ignorance of our homeland doesn't surprise me. It's the capital of Morrowind... been that way ever since Mournhold was sacked by the Argonians. I don't visit there often anymore, but we still get the occasional supply ship and visitors from there." Asking about the Argonian invasion he says, "Quite a while ago, yes. They cut a bloody swath across most of the southern region of Morrowind. Nobody seems certain why it happened... an attempt at expansion, revenge for the enslavement of their people or perhaps both. Whatever the case may be, thousands of Dunmer needlessly lost their lives and many more were exiled from their homeland." If you are a Dunmer however, he will instead say "How can you have Dunmer blood in your veins and have no knowledge of Blacklight."

This Skyrim-related article is a stub. You can help by expanding it.
Retrieved from "https://en.m.uesp.net/w/index.php?title=Skyrim:Adril_Arano&oldid=2118028"
Categories:
Hidden categories: