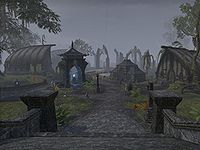 Stormhold is one of the eight major cities in the province of Black Marsh,[1] serving as the largest settlement of the region of Shadowfen. Stormhold has a dark history that involves the nearby Dark Elves, as it was once the foothold of their slavery industry in the province. The modern-day Stormhold was built atop of an Ayleid ruin known as Silyanorn (translated as Library in Barsaebic Ayleidoon).[2] During the time of the Ebonheart Pact, the city-state of Stormhold was named the capital of Black Marsh, at least for portions of the province that was affiliated with them.[3] 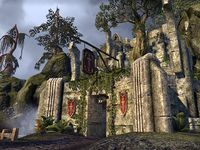 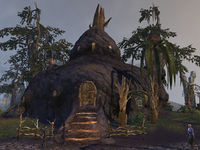 Stormhold is located near the banks of a mighty river that forms the provincial border between the primordial morass of Black Marsh and the scenic grazelands of Morrowind. But even though the river is practically outside of the city walls, the land around Stormhold is sunken marshes and crocodile-infested ravines with shallow waters. Much of the city is built on top of the old Ayleid ruins and wide-open mounds surrounded by ravines. Silyanorn was built on the side of a mountain, around a waterfall that flows into the rest of the settlement. Even though the town uses both the stone, ornate architecture of the Dark Elves and the large mud huts of the Argonians, the local populous utilize the abandoned compound for a variety of services, such as the town's mortuary or for their spacious guild halls.

In the time when the Dark Elves took control of Stormhold, they fully refurbished the site with proper stone roads, light posts, and long wooden bridges. The local Hist Tree of Stormhold is located in the town square, in the middle of a pond, surrounded by ancient pillars, broken arches, and a small stone wall that circles around it. There is a common exclamation, "Host of Stormhold," which is used across Black Marsh.[4] Underneath the city is sunken ruins used as an outlaw refuge and an expansive system of tunnels that contains rare crystals aptly named Stormhold Crystals. They contain a variety of magical properties, enough for them to be heavily exploited by the Warden, Quintus Varus.[5] Stormhold is neighbored by several settlements, including Rockguard to the northwest, Tenmar Wall to the east, and Morrowind to the north, towards Narsis.[1][6] 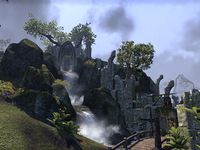 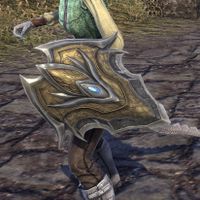 Stormhold began as the Ayleid city of Silyanorn, founded by the Barsaebic Tribes that were exiled from Cyrodiil after the Narfinsel Schism ended in 1E 198.[9] The tribes were very far removed from their brethren in the west and managed to avoid the Alessian Slave Rebellion that occurred a few years later.[10] However, that does not mean the Empire had left the city all by their lonesome. Silyanorn was the focal point of a conflict known as the War for Silyanorn, which involved the First Empire and even Great House Indoril of Morrowind. Not much is known about the war, but it took place sometime before Empress Hestra's pursuit of Red Bramman in 1E 1033.[11] According to local legend, the Ayleids were conquered by the Hist[12] and then there was an enormous battle between the elves and the Argonians for control of the region.[13]

In the late First Era, the Second Empire of Reman II launched an expansive campaign over the uncharted Argonia known as the Blackwater War.[14] The second wave of these campaigns was led by the Fourth Legion and their General, Regulus Sardecus, known by the epithet, "the Rock". His armies were able to retake much of the land that was lost from the first campaign and while his diplomacy and war knowledge were top notch,[15] his greatest asset was acknowledging the true enemy, the swamps. This however, proved to be his greatest folly. The General ordered one of his trusted legates, Elissia Mallicius to burn a peat bog outside of Stormhold for an attack. But in doing so, she razed the entire swamps from Stormhold to as far as both Gideon and Soulrest. It took the Imperial Legion a month to realize that the entire forest was burnt down. This event ended Sardecus' campaign and his tenure in the army. Not long after his army's withdrawal, he died of unknown circumstances and it has since been a matter of historical debate.[16] 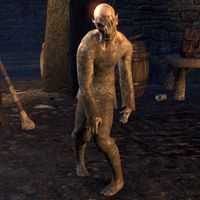 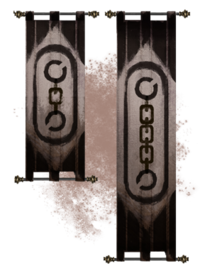 Out of the blue, the Knahaten Flu had quickly started to spread from Stormhold and killed off the non-Argonian population of not just Black Marsh, but in other provinces such as Elsweyr. It is theorized by many that the flu either came about from natural causes, or if it was a vengeful shaman against the slavers moving in from Morrowind at that time. Many races and tribes were lost to the flu, such as the silver-skinned Kothringi and the vulpine nomads, the Lilmothiit. The province was restrained by the Knahaten Flu for over forty years but only the Dark Elves of House Dres had really delved into the province and continued about their slaver industry.[10] Sometime later, the Dark Elves held control over Stormhold, and at that time, there was a wide-assortment of races living in the city. Surrounding Argonian villages tend to warn other Saxhleel from going to city because of how quick Dres slavers act on unsuspecting people.[17]

The Dark Elves rule over Stormhold has been described as "venomous and uncaring," and they built over much of the ruins. The western section of Stormhold is where the Argonian populous lived in, and it was where treacherous Argonian worked with the Dark Elves to raze primitive villages and gather people for their plantations. The city and the fate of the surrounding tribes had gradually became worse by the Second Era, as crime ran amok in the city, the slave industry continued to thrive, and even greedy Imperial warlords coming to Stormhold to reap the wealth. That was until the invention of the Vicecanon, city leaders that serve the same functions as councilors or tribal leaders do in other provinces.[9]

At around this time, there was a large assault on a Dres Enclave outside of Stormhold led by the then traveling spirit, Keshu the Black Fin and her ally, the young prince Jorunn of Skyrim.[18] Keshu had soon become a popular figure among some of the freed slaves and eventually established the Black Fin's Legion, an army that encompassed Saxhleel from across the province. For the next several seasons, Keshu's legionnaires fought in a constant war with House Dres, intercepting slave caravans between Morrowind and Stormhold.[19]

Stormhold in the Ebonheart PactEdit 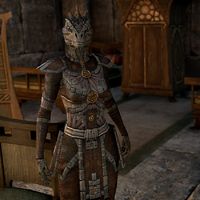 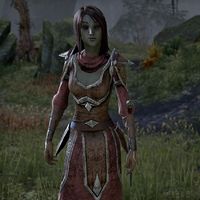 The Dark Elves continued their rule over Black Marsh as the years moved on. In 2E 572, the Snow Demons of Akavir invaded Skyrim and moved southeast into Morrowind. The escaped slave, Heita-Meen received a vision from a hist tree in an Archein village of the ongoing violence in the Second Akaviri Invasion. She murdered the tyrannical councilor of Thorn and moved west to Stormhold with the councilor's Archein Guards.[20] It is recorded in history that the Shellbacks of Stormhold were involved in the Second Akaviri Invasion as the main Argonian force in the conflict, but how they became involved is not clear. One sources says that Keshu the Black Fin received a call to arms by the then newly-named High King Jorunn to assist his army in Morrowind, so she assembled her shellbacks and pressed onward.[21] Other sources say that when Heita-Meen traveled to Stormhold, she convinced the Shellbacks with help from the magus, Walks-in-Ash. They moved into Stonefalls and provided the final push to defeat the Akaviri.[20] After that, the three defending races formed an alliance of survival, the Ebonheart Pact. Stormhold was the capital of the allied Pact regions.[3]

By 2E 582, there were three vicecanons of Stormhold, all of which were war heroes of the Akaviri War, Heita-Meen of Black Marsh, Hrondar of Skyrim, and Servyna of Morrowind.[22] In that year, there were strange occurrences in Stormhold, all of which were tied together, the victims were murdered Dunmer. Rumors indicated that the culprits were the Shadowscales, so Vicecanon Hrondar sent an adventurer to investigate the situation and the recently deceased. One of the bodies was seemingly charred but there was no indication of natural fires, the others were from precise cuts, one to the throat and one to the chest. However, there were similar slices near the chest after the death. When one of the supposed dead was seen attacking their widowed husband, they were intercepted by a Shadowscale scout. The adventurer killed the perpetrator, who was a skin-stealer.[23]

Vicecanon Hrondar went missing not long before, prompting the search to continue further. An argonian citizen recognized one of his comrades kidnap the vicecanon and take him to the abandoned section of Silyanorn.[24] A spy from the Aldmeri Dominion attempted to steal their notes but was stopped by the adventurer, who moved onto Silyanorn. They fought through waves of skin-stealers who disintegrated into red dust after they were defeated until they rescued Hrondar from his prison.[25] Now that the Pact were aware of the Dominion's presence, they soon went to war across Shadowfen. They discovered the Dominion army in the bowels of Ten-Maur-Wolk and prepared a large-scale battle to drive them out.[26]

Stormhold in the Third EmpireEdit

During the Imperial Simulacrum in the late Third Era, the city-state of Stormhold was an active settlement. It was ruled by Queen Aphiana and it had a rivalry with Helstrom.[8] After acquiring the sixth piece of the Staff of Chaos, the Eternal Champion needed to locate the dark forest that ever moves, Murkwood where the next piece was located. Their journey brought them to Black Marsh and the city of Stormhold, where they came into contact with Idolan Lancaster, the leader of the local Conclave of Baal. Lancaster told them that if the champion retrieved a lost tablet from the ruins of the Vaults of Gemin, he would be able to decipher it and reveal the forest's location. Through triumphs and tribulations, the Eternal Champion was able to locate Murkwood and retrieve the seventh piece of the Staff. With only one province left, the champion traveled north into the ash wastes of Morrowind.[27]

The city's prison held an infamous reputation[5] in the late Third Era circa 3E 427.[UOL 1] The Warden, Quintus Varus, was a reputed lunatic who broke into the old tunnels beneath town in search of valuable Stormhold Crystals. He had certain prisoners, nicknamed Tunnel Rats, dig for them in the haunted passages in return for a moderate amount of freedom. The prison soon became corrupted with evil; the prisoners went mad, slowly turning into horrible beasts. The corruption was kept at bay by storing it in Hollow Crystals. Varus' true goal was to find the location of the Storm Crystal, a powerful artifact made by the priests of a nearly forgotten religion. Varus had planned to remove all evil from the Empire and store it in the crystal. However, a prisoner nicknamed the Master Tunnel Rat entered the prison, gathered allies and equipment, and tracked down the Storm Crystal. The prisoner and Varus battled over it, and the prisoner was victorious. Although the crystal could not hold the evil of the world, the prisoner used it to undo the corruption in the prison, allowing the innocents to go free.[5]

The city was overrun by the undead army of Umbriel in 4E 48, despite not being beneath Umbriel's shadow.[28]:42 This destruction was considered light compared to locations that fell within the floating city's path.[28]:44