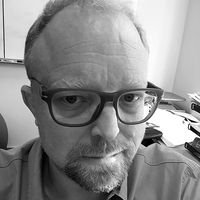 Ted Peterson was one of the original developers, along with Julian Lefay, who started the work on the Elder Scrolls series. Since then, Peterson was a major contributor to both Arena and Daggerfall, working as the lead designer for the latter. After the release of Daggerfall, Peterson left Bethesda to work in the animation and entertainment industry for awhile before coming back to the game industry under the employ of Activision. After a year and a half of that, he joined Savage Entertainment as their Lead Designer.

Peterson's contributions to the lore of the Elder Scrolls series are hard to overstate. At one point, he estimated that he had written 150,000 words for the in-game books alone, and this was before his contributions to Oblivion. Even though he no longer works at Bethesda, he still does contract work for them writing in-game books for both Morrowind and Oblivion. He is also a contributor to the Lore Section of the Official Forums under the name Sheogorath. The Mad God's name is actually derived from Peterson's first name, Theodore.

According to Peterson, Daggerfall owes more inspiration to written books than other video games at the time, but Arena owes a bit of its design to Ultima Underworld, Legends of Valour, and a variety of pen-and-paper RPGs. In fact, Peterson went on to say that "we weren't doing anything too new. We just did it bigger. Much, much bigger." As an interesting note, Arena's name came from already having the boxes printed out, and not wishing to waste money on printing new ones. The subtitle, which eventually became the name of the series, "The Elder Scrolls", was added for no particular reason as well.

He is currently the design director of OnceLost Games and is presently working with Julian LeFay and Vijay Lakshman in creating a spiritual successor to Daggerfall.[1]