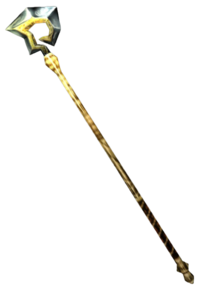 The Crosier of St. Llothis (Morrowind)

The Crosier of St. Llothis is a staff sacred to the Dunmer as a holy relic. The undefeated spirit of St. Llothis the Pious is said to be contained within it.[1] However, the staff's fitness for combat is questionable, as the staff's enchantments actually have various adverse effects on the wielder.[2]

Circa 3E 427, the Captain of the Buoyant Armigers took the staff into battle against Dagoth Ur's forces on Red Mountain. To protect his retreating subordinates, the Captain mounted a last stand near Dagoth Ur's citadel, and the staff was lost.[1] The Nerevarine soon recovered the relic, and then received it as a reward for various services to the Tribunal Temple.[2]