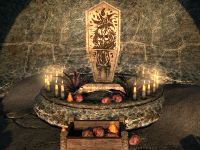 The Three Good Daedra is the Dunmer (and before that, Velothi) term for three of the Daedric Princes: Azura, Boethiah, Mephala. These Princes are worshipped by the Dunmer as their ancestors. They are contrasted with the Bad Daedra, who are believed to test the Dunmer people's resolve and faith.[1][2]

The Tribunal replaced worship of the Good Daedra among the settled Dunmer following their apotheosis at the Battle of Red Mountain, and the three Good Daedra were thereafter known to the Tribunal Temple as the Anticipations of the three Tribunes.[3] The Ashlander tribes refused to worship the Tribunal and remained true to their worship of the Good Daedra. House Indoril still honored the Good Daedra.[4] Following the deaths of the Tribunes and the rise of the New Temple, worship of the Good Daedra was restored and they became known as the Reclamations.[5] They are now also called the True Tribunal or House of Reclamations, having reclaimed their place in the hearts of the Dunmer people from the "false Tribunal" that used their status to shield the True Tribunal from the public's minds. The name "Anticipations" is no longer used for them, as they have reclaimed their identity and no longer represent the patronage of the false Tribunal.[6] Not all settled Dunmer turned away from Tribunal worship, although those few hidden sects who continued to worship the Tribunes as gods were persecuted by the New Temple for their heretical beliefs.[7]

This Lore-related article is a stub. You can help by expanding it.
Retrieved from "https://en.uesp.net/w/index.php?title=Lore:Good_Daedra&oldid=2664266"