This article is about the Daedra. For the ruins of the same name, see Brothers of Strife (place). 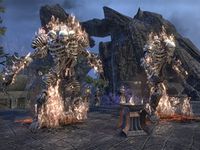 The Brothers of Strife at the moment of their creation

The Brothers of Strife are two Daedric beings that act as guardians of the Stonefalls region of Morrowind. They both take the form of a flaming bone colossus, a towering undead construct usually assembled from the bones of many corpses. Although the Brothers are a powerful weapon, they cannot be controlled and thus were eternally bound.[1][2]

The Brothers were created in the Merethic Era by the Daedra-worshipping Chimer clans of the region after Nedes from Skyrim had successfully invaded Stonefalls. Faced with imminent defeat, the Chimer army made a last stand at a Daedric shrine far south of modern Ebonheart. Despite the dangers, the Chimer performed a dark ritual to summon the Brothers of Strife, using flame atronach essences and the hearts of their Nedic enemies, and offering two of their leaders as sacrifices. The monsters succeeded in crushing the Nedes and liberating Stonefalls, but continued to rampage.[2] Using flame atronachs as guardians, the Chimer managed to bind the brothers atop Ash Mountain and the Tormented Spire, two large volcanoes that dominate the region. The responsibility of keeping the Brothers bound eventually passed down to House Indoril and House Dres, two Great Houses of the Dunmer, the descendants of the Chimer. These bindings were briefly broken in 2E 582.[3][4]

Balreth was named after General Balreth, the Chimer who was sacrificed during his creation. He was bound within the caldera of Ash Mountain, and eventually became the responsibility of the Indoril of Davon's Watch. In 2E 582, the Daggerfall Covenant put the city under siege as part of a wide-scale invasion of Ebonheart Pact territory. Despite the warnings given by his ancestors, Tanval Indoril summoned Balreth to defend the city, wiping out the Covenant invaders.[5] No longer bound, Balreth retreated to his prison atop Ash Mountain, although a contingent of Pact soldiers managed to rebind him there before he could go on a rampage.[3] 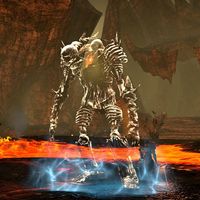 Sadal was named after Legate Sadal, the Chimer who was sacrificed during his creation.

During the Merethic Era, the Coral Heart was used to imprison him within Sadal's Prison, a small pocket realm of Oblivion that could only be accessed from the caldera of the Tormented Spire. His imprisonment was the responsibility of the Dres of Kragenmoor, who limited access to the top of the volcano.[6] Reeling from his son's death at the hands of the Covenant invaders at Fort Virak, Tanval Indoril sought to exact revenge by unleashing Sadal in 2E 582.[7] Realizing his mistake, Tanval aided the Pact in rebinding him before he could even leave the pocket realm. However, Tanval perished in the process.[4]