This article is about the city on the mainland. For the castle on Vvardenfell, see Castle Ebonheart.

Ebonheart, also known as the Black City[1] or Old Ebonheart,[2] is one of the eight-major cities on the mainland of Morrowind,[3] specifically in the region of Stonefalls. Ebonheart has been described as the eldest city-state of Morrowind, but it is more known as the ancestral holding of the Ra'athim Clan, an ancient family of miners that have become some of the province and even the continent's greatest leaders. Their most well-known members are Moraelyn and Katariah. For an undisclosed time, Ebonheart was the capital of Morrowind, until Moraelyn's twin grandsons were left joint-heirs, resulting in the creation of modern-day Ebonheart and Mournhold.[4] 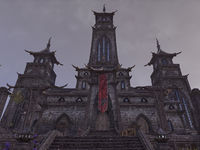 The Argonian Quarter of Ebonheart

Ebonheart is found on the north-central coast of Stonefalls, in a strategic location on the Inner Sea. The city was the seat of power of a mighty country led by the Ra'athim Clan, one that spanned many mining fiefdoms and encompassed what would become modern-day Mournhold. Considering that the Ra'athim Clan's parent faction, House Mora was absorbed into the Great House Hlaalu, it would put Ebonheart inside the occupied district of the Great House.[4] Beyond the walls lies the ash wastes of the region and the ridged hills of the mountains, where only the local Ashlanders and mining prospects can seem to withstand. The majority of Ebonheart proper is built on an island, nestled in the large river basin next to the inactive volcanic spire, Ash Mountain and the aforementioned river, which comes from the south. While some maps show the river going as far south as south-central Morrowind, near Narsis,[3][nb 1] others indicate that it starts in the mountain valley called the Brothers of Strife and it descends downward into the Ebonheart basin.[5]

The city is surrounded by a large stone walls and on the outside is open land where people tend to set up encampments. At the center of Ebonheart city is the seat of power, Castle Ebonheart, which sits on a stone foundation that overlooks the waterfront and the local Argonian Quarter. The south side of the castle contains the local city plaza and parkland, right in the middle of the main street that is anchored by the local Temple to the west and the local cornerclub to the east. Around the castle is two steep staircases that lead into the Argonian Quarters, lowland with wooden planks and ashreeds on the side of the road. At the center of it all lies their Hist Tree, which has been here since the Interregnum. According to the historical-fiction, 2920, The Last Year of the First Era, the Tribune of Sorcery, Sotha Sil has a hidden laboratory in the smoky catacombs underneath the city, where he "forged the future with his arcane clockwork apparatus."[6] Ebonheart has several neighboring settlements, such as Darnim Watch to the east, Eagle Moor and Mournhold to the southeast, Old Keep to the far southeast, Riverbridge to the southwest, and Stonefalls to the northwest.[3]

Ebonheart has been called the eldest city-state of Morrowind, a title that its Kings have held the utmost pride for, often using the phrase, "first among equals." Since the province's earliest history, Ebonheart and Mournhold were bitter rivals, but were originally part of one nation ruled over by the Ra'athim Clan. The clan claimed mining fiefdoms across the region and even the High Kingship of Morrowind. The Ra'athim Clan were members of House Mora, a minor political house that has human ancestry. At an unknown time, House Mora was absorbed into the Great House Hlaalu, in turn bringing both the Ra'athim Clan and Ebonheart with them.[4]

When the First Empire of the Nords invaded Morrowind in the early First Era, the Kingdom of Ebonheart was ruled by King Kronin, who had three sons, Cruethys, S'ephen, and Moraelyn. After the Nords conquered the entire region, the King and his sons turned to a life of banditry and raided across eastern Skyrim and the Velothi Mountains. They were known to use guerrilla warfare, which caused great havoc across the Nordic countryside. Eventually, the four partook in retaking Morrowind in 1E 416, returning to Ebonheart after a century and a half of Nordic occupation.[8] Sometime afterward, Cruethys was named the King of Ebonheart and eventually passed the position onto Moraelyn. S'ephen was not recognized as a part of the pure family, because of his heritage. So instead, King Moraelyn offered him a temple-cult in his birthplace, Mournhold, and the role of protecting the Horn of Summoning.[4][7][9]

As time went on, King Moraelyn passed his role to his daughter, Lian, who in turn, had twin sons, both heirs-apparent to the Kingdom of Ebonheart. These two were given joint-heirs, which split the greater region into modern-day Ebonheart and Mournhold. It was at this time however, the seat of the High King was vacant, in favor of a war leader in a time of provincial emergency. At some point later, both of these kingdoms disputed over ownership of the Staff of Chaos, an ancient staff of immense power. But ultimately, Mournhold was able to claim the staff, citing that not only was it Ephen's life goal to protect the Staff, but that the city was also the god's birthplace.[4] Eventually, Ebonheart lost its role as the capital to its rivals in Mournhold. Though the exact circumstances are unknown.

The Ebonheart Pact and Foreign IncursionsEdit

The Sigil of the Ebonheart Pact 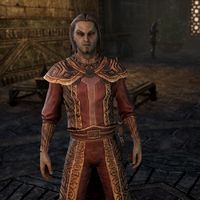 Many years later in 2E 572, the Second Akaviri Invasion took place across the northeast of Tamriel. After the destruction of Windhelm in Skyrim's northeast coast, the Kamali of Akavir, under the command of Ada'Soom Dir-Kamal, advanced southeast into Morrowind, and the volcanic ashlands of Stonefalls.[10] Dir-Kamal's forces were surrounded by the triad of armies, the Nords of Eastern Skyrim, the Dunmer of Morrowind, and the Argonians of Black Marsh. At the coral fields of Vivec's Antlers, the Akaviri were defeated and these three races gathered in Ebonheart, to create an alliance of survival and necessity, known as the Ebonheart Pact.[11][12]

By the Interregnum in 2E 582, the town of Ebonheart was nominally ruled by House Dres through Councilman Drathus Othral. Despite Dres rule, the city's security forces were of House Redoran[13] and House Hlaalu held significant influence in the city as well.[14] At this time, the Daggerfall Covenant had invaded the Pact's waters, already taking Bleakrock Isle and sacking Bal Foyen. The Covenant armada landed on the shores of Vivec's Antlers, and the Councilor felt that the invasion could destroy Ebonheart. He believed that if the several races in Ebonheart had united against the armada, they will be able to survive. And so, he enlisted the help of a wandering traveler to unite the races in Ebonheart. Through sleuthing, the warrior revealed that the traitor, Rhavil Urano had sent intel to the Covenant. Urano was defeated and Ebonheart's people came together to prepare their defense.[15]

Ebonheart in the Third EmpireEdit

Even as far as a hundred years after Tiber Septim's conquest and the establishment of the Third Empire, the Kingdom of Ebonheart was still ruled by the Ra'athim Clan. The royalty of Ebonheart were allies of Potema Septim and Uriel III, even joining their battle against the Empire, known as the War of the Red Diamond. It was no secret that Ebonheart supported the Wolf-Queen. To cement relations between the Kingdom and the Empire, Emperor Magnus Septim arranged the marriage between his son, Pelagius III and the Duchess of Vvardenfell, Katariah Ra'athim. Part of the reason was because of Katariah's talent as a diplomat, perfect for hiding the true demented nature of Pelagius.[16] Katariah ruled over the Third Empire as the Regent-Empress, following Pelagius' death. She later passed away in 3E 200 after a skirmish in Black Marsh.[17]

During the Imperial Simulacrum in the late Third Era, the city-state of Ebonheart was an active settlement. It was ruled by King Casik, who had a reputation of extreme ruthlessness. It had a rivalry with several cities (namely Blacklight, Firewatch, Kragenmoor, and Mournhold).[1] After acquiring the seventh piece of the Staff of Chaos, the Eternal Champion made their way to the province of Morrowind, to find the final piece. From rumors, the warrior arrived into Ebonheart and gained an audience with King Casik, on the location of Dagoth-Ur's entrance. The King had the means to open it, but they need to find the Hammer of Gharen and strike it on the Anvil of Mithas. The Dwemer artifact was hidden in Black Gate. Sometime later, the Eternal Champion returned with the hammer. The King struck the anvil, releasing a tone that paved the way for the Dagoth-Ur mines.[18] Since the champion's victory over Jagar Tharn, Imperial-loyalists made pilgrimages across the continent to re-trace the steps of the Eternal Champion, which included Ebonheart.[19]