Concept art of an Ashlander for Morrowind

The Ashlanders are Dunmeri nomads that traditionally hail from Morrowind's wilderness.[1] In the Merethic Era, Ashlanders and other Dunmer were very much alike and on equal footing, but since the days of the First Council and rise of the Great Houses, they have steadily been forced into the poorest and most hostile lands.[1][2][3] They travel along with their herds, camping wherever is suitable.[1] Additional resources gained by hunting the local wildlife are used to manufacture huts, armors, clothing and general household items. Ashlander culture is the remains of the ancestor-worshipping tribal culture which the House Dunmer left behind.[4]

Unlike the settled Dunmer of the Great Houses, they did not acknowledge the power of the Tribunal; rather, they believed the Tribunal betrayed Lord Nerevar at the Battle of Red Mountain, and that they were kept alive by magical means not unlike Necromancy.[2][5] The Tribunal's disappearance and the disastrous Red Year of 4E 5 eventually led other Dunmer to abandon widespread Tribunal worship and to appreciate the Ashlanders for preserving their heritage.[6][7]

The Velothi (named such after the prophet Veloth) are Ashlanders who have abandoned nomadic life and settled among the city Dunmer. The Velothi are despised by the Ashlanders, who view them as weak and soft. Meanwhile, the Dunmer look down upon the Velothi as an insignificant underclass.[4] 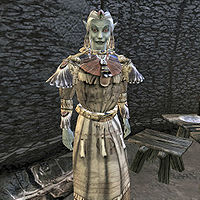 Ashlanders in general are very proud, and they do not like to admit to things that shame them, especially the men; it is suspected that these tendencies may have contributed to their reputation among other Dunmer for being untrustworthy liars.[3]

Their internal culture is very polite, but according to late Third Era accounts, before their vindication in the eyes of the civilized Dunmer, the Ashlanders were very xenophobic, shunning all outlanders, and were known to be aggressive towards foreigners in their lands (even though one of their own forgotten prophecies claimed the Nerevarine would be a foreigner).[8][9][10] However, if an outlander performs a good deed for an Ashlander clan, they may be named Clanfriend, and thus be adopted into the tribe.[3][9][11]

Ashlanders think it shameful to attack unarmed persons, but they will kill without hesitation an armed person who offends them or their clan laws.[10][12] Those who do not know their customs risk offending them just by speaking.[3] Challenges for sport can be declined without shame, but not challenges for honor.[13] Honor challenges come from perceived offenses or arise from customary formal challenges of status or ritual. Ashlanders may challenge a stranger who enters a yurt without invitation; customs differ with different tribes, but polite visitors who leave when requested may be forgiven.[10][14]

Gift-giving is particularly important in their culture. Among Ashlanders, a gift is a token of courtesy among strangers, and affection among friends. A thoughtful gift signals the giver is cautious, considerate, and aware of the receiver's wants and needs.[15]

The Ashlanders are a nomadic people, and they live in huts which can be dismantled and moved. Their portable huts are comprised of hides stretched on a chitin frame. These huts can can be dismantled quickly and packed atop a guar to move to new grazing or hunting grounds. The khan's tent is a larger, more elaborate version of a family tent.[16] They have no need for material wealth. Big buildings, heavy furniture and fancy clothes are things the House Dunmer have which the Ashlanders consider useless trash.[17] 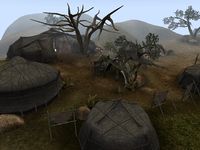 The Ashlanders of Vvardenfell are divided into four clans: the Ahemmusa tribe of the Azura's Coast region, the Erabenimsun tribe of the Molag Amur region, the Urshilaku tribe of the Ashlands and West Gash regions (strong believers in the Nerevarine Cult),[10] and the Zainab tribe of the Grazelands region.[1] They are often at odds with each other.[3]

There are also tribes living on the mainland, such as the Kagesh and Ulath of Stonefalls, the Vereansu of Deshaan, and the Mabrigash of the Vale of the Ghost Snake.[18]

Each clan is traditionally led by an Ashkhan, whereas the spiritual leadership lies with the Wise Woman. The secrets of the Wise Women are passed from one generation onto the other.[19] Several prophecies, in the form of verses such as the Stranger, have survived throughout the years.[9][11] Many others are believed to have been distorted or lost, but, as rumor will have it, the Dissident Priests may have recorded them and thus preserved them for posterity.[11][20] The Wise Women of the Ashlander clans interpret dreams as prophecies, another major difference with the Tribunal Temple.[10][20]

If an Ashlander commits a crime against another member of a clan, they will be cast out of the clan. These outcasts have small camps in isolated areas; they often either become laborers in the mines or resort to banditry.

All Ashlanders in a tribe, young and small, are born into the Ancestor cult of their clan. They worship their deceased family members and the three Good Daedra, Azura, Mephala and Boethiah, whom they see as divine ancestors.[21][22] Ashlanders also venerate the Four Corners of the House of Troubles.[23] They attempt to appease the Four Corners through worship.

The Nerevarine Cult is a different cult with the Ashlander tradition. It's a small cult, and only among the Urshilaku do its followers have any influence. They revere Nerevar, the great Ashkhan and Hortator, for he was the Champion of Azura, and he was instrumental in defeating House Dagoth and the Dwemer.[10]

Following the disastrous Red Year, widespread worship of the Tribunal ended. In its place the former Dissident Priests took full control of the Temple and sought to reinstate worship of the "Anticipations" (Azura, Mephala, and Boethiah) as the "New Temple". Fittingly, the daedra were dubbed the "Reclamations", as if they were reclaiming their status from the Tribunal. The rise of this New Temple almost completely vindicated the previously persecuted Ashlanders, who had persevered in worshipping in the three daedra for millennia. Among the Dunmer, the Ashlanders are lauded for having the "true vision" to keep true to the old ways. It is now quite common for many Dunmer to make the arduous pilgrimages into the ash wastes to seek the counsel of the Wise Women, who have done much to dispel Tribunal worship. They directly connect the eruption of the Red Mountain and the Argonian invasion to the anger of the three Daedra.[6][24]