The Tagh Droiloch (also known as High Dark Wizards in the language of the Reach) were secretive Reachfolk coven made up exclusively of the witch-men, not witches, which is a rare practice among the Reachfolk. They were specialized in conjuration magic and commanding the Daedra. The witch-men coven exerted power over Reach in secret during the Interregnum and were responsible for Durcorach's rise to power.

The Talos Cult is a fringe group that reveres Tiber Septim, founder of the Third Empire who apotheosized to become the divine Talos. They have many followers within the Imperial Legion.

The Tarnished are those who lack the skills required to become a Clockwork Apostle, or are incapable of being merchants or craftsmen. As a result they are cast out and become Tarnished. The Tarnished live in the slums of Slag Town. The Tarnished are disenfranchised, and often have to rely on themselves to get by.

The Temple of Kynareth is the temple dedicated to Kynareth the Pure One, the Goddess of Winds and the Heavens. These are generally the place of worship for her. The priesthood of the temple fancy themselves as physicians and philanthropies, offering their services to cure diseases and ailments, ranging from the mundane to the magical. Those that can show their devotion to Kynareth, and even have the skills to make that veneration worthwhile are given membership to the temple. The Kynaran Order is their militant arm and the Kingdom of Daggerfall is one of their strongest allies. In the Iliac Bay, the temple has many chapters, which includes the Alcaire and the Wrothgarian Mountains in High Rock, and both Kozanset and Myrkwasa in Hammerfell.

The Temple of Stendarr is the temple dedicated to Stendarr the Steadfast, the God of Mercy and Justice. These are generally the place of worship for him. The temple is the common man's place of healing, where everyone is welcomed no matter the strength or background. While they do not offer an extensive amount of care like the Temple of Kynareth, they can provide the necessary training to help those in need. They believe that the best way to bring out people's compassion is by having them look into themselves. The Crusaders is their militant arm and the Benevolence of Mara and cult of Boethiah are considered their allies. The Temple of Stendarr is considered the enemies of the Citadel of Ebonarm. In the Iliac Bay, the order has many chapters, some of which include the Alik'r, Mournoth, and Santaki in Hammerfell, and Bhoriane, Phrygias, and Urvaius in High Rock.

The Temple Saints are the most honored ancestors of the Dunmer, canonized by the Tribunal Temple for deeds they performed during their lifetime. They are celebrated as models of virtue and piety, often invoked for aid and protection. After the fall of the Tribunal, the three Tribunes were re-appointed as saints by the New Temple.

The Tenarr Zalviit (Ta'agra for Night Stalkers) were an ancient Khajiiti vampire clan that had resided in the Tenarr Zalviit Ossuary, a burial crypt in the Weeping Scar of Anequina, since at least the time of the Thrassian Plague. Under their Clan Mother, they lived a peaceful and pacifist life for many centuries, co-existing with the living Khajiit by watching over their dead in exchange for blood offerings.

When the Knahaten Flu hit Orcrest, the ossuary's burial vaults were filled with the dead and clan numbers swelled when flu survivors were turned into vampires. This led to its own set of issues as the small clan's growth made it difficult to sate everyone's hunger. Their policy of feeding on thin-blooded animals in a region sparse of fauna led to them being weakened and vulnerable when a group of necromancers raided the crypts and killed the Clan Mother. Rakazsa seized power and urged the clan to give in to their predatory nature and prey on passing caravans, citing the Clan Mother's weakness was due to their pacifism.

Yushiha, an exile from the clan, sought help from the Vestige when a group of caravanners were abducted by the Tenarr Zalviit and held in the ossuary. The Vestige rescued them and killed Rakazsa, leaving the clan leaderless and vulnerable.

The Ternion Monks were a monastic order based in Skyrim. They were dedicated to the worship of three animal totems: bear (Tsun), wolf (Mara), and fox (Shor), collectively known as the Three Old Gods. Their religion itself is ancient, dating back the Atmorans and their worship of the animal totems. The monks are also known for their healing magic and can call forth aspects of the Three Old Gods. With the help of these spirits, the monks can perform tasks beyond the scope of mortal limitations.

The Ternion Monks typically worship and meditate in holy retreats that are almost inaccessible to outsiders. Often, access to these temples is only possible with the use of magic, and entry to outsiders is only granted if they are in great need and are worthy. By the Second Era, the order was in decline as very little proselytizing took place and fewer and fewer converts took up the worship of the Three Old Gods.

In 2E 582, the Ebonheart Pact sought the aid of the Ternion Monks in order to cure High King Jorunn, who was suffering from the effects of a potent Daedric poison. The Vestige, with the aid of the aspects of the Three Old Gods, entered Joruun's nightmares and saved him.

Banner of the Thalmor

The Thalmor refers to an Altmeri governmental organization that has served each of the three Aldmeri Dominions in varying capacities. It is also a general term for the members and paramilitary enforcers of that organization.

The Thieves Guild is dedicated to the gathering and training of those who are stealthy and shadowy in nature. Although criminal by its very definition, for untold years, local authorities in places throughout Tamriel have tolerated the existence of the guild for its role as "crime regulator", as it does not tolerate competition or egregious conduct from its members (not to mention the personal financial benefits for authorities who play nice). It is usually considered to be a distinctly Imperial entity, though of course other organizations of the Empire do not officially condone their actions.

Like any trade guild, the Thieves Guild is an organization of professionals, except that in this case the professionals are burglars, robbers, pickpockets, smugglers, and other enterprising operators. They typically don't have public guild halls, but sometimes have safe-houses, and members tend to gather at a single location in large towns, such as at a cornerclub, inn, or tavern. Typically, members are bound not to rob each other, kill anyone while thieving, or rob the poor. The Thieves Guild usually has the resources to bribe officials, establish a black market of stolen goods, and maintain a network of informants.

The guild can trace its origins back to the Thieves Guild of Abah's Landing, a criminal organization that existed in the city during the Interregnum. For historical information, see the Lore article.

Thrafey is one of the vampire bloodlines of the Iliac Bay area.

The Daedric Triad (also simply the Triad), was the alliance between Daedric Princes Nocturnal, Mephala, and Clavicus Vile. In 2E 582, they launched their plot to gain influence on Nirn and bypass Sotha Sil's Coldharbour Compact.

The Thornroot Clan was a Reachmen organization active during the Second Era, when they were considered one of the most powerful clans of the Reach. By the time of 2E 582, they were considered fierce and strong, known to usually camp by the area of the ruins of Briar Rock, with the leaders of the clan usually being Hagravens, who allowed the clan to be peaceful to other Reachmen clans, with the group focusing their wrath against foreigners, with many of their warriors being briarhearts, which made the Clan very dangerous in battle. They were also considered to be an extremely reclusive coven of witches.

The Tribunal Temple was the native religion of the Dunmer of Morrowind. They worshipped Almalexia, Sotha Sil, and Vivec, known together as the Tribunal or Almsivi. Most people usually just call it "the Temple". They accept outlanders as members, but most of the few outlanders that do join, join only for the services provided. On Vvardenfell, the Temple District included the city of Vivec, the fortress of Ghostgate, and all sacred and profane sites (including those Blighted areas inside the Ghostfence) and all unsettled and wilderness areas, as the Treaty of the Armistice with the Empire maintained the island as a Temple preserve. In practice, this district included all parts of Vvardenfell not claimed as Redoran, Hlaalu, or Telvanni Districts.

The Tumnosh Clan were one of the founding Orc clans of Old Orsinium in the First Era. Malacath described them as "the great builders" of Old Orsinium.

The Twilight Cantors are a Khajiiti order of wandering priests dedicated to Azurah. They live a life of wine and prayer―full of dozing and bathing and joyful music. They spend a great deal of the day sleeping when they are not on the road. The Twilight Cantors do not consider themselves "professional musicians", and do not charge for their work. Sometimes, they'll sing at joyful events, such as weddings and namings. The leader of the Twilight Cantors is known as the Chief Crier.

Despite their peaceful and idyllic day-to-day activities, the Twilight Cantors serve a very important purpose in Khajiiti culture. Wherever the dro-m'Athra appear, the Twilight Cantors soon follow. They are called upon to perform exorcisms and expel Namiira's children from the Mundus through means such as prayer, chanting, and singing. They are treated by the common folk with reverence and fear. It is commonly believed that a cantor's presence is a sign of imminent misfortune. Thus, when the Twilight Cantors come to visit, the locals are quick to give them offerings. The Twilight Cantors have little need for worldly possessions, and when traveling, generally carry only the necessities and tools that assist them in their duties. An example of these tools are ankle chimes, whose music aids in the expulsion of dro-m'Athra. 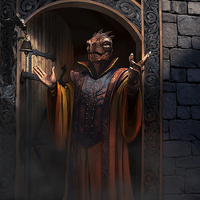 The Twin Lamps was the secret, underground slave recovery and rescue guild of Morrowind. The group helped free slaves, primarily Argonians and Khajiiti and transport them out of Morrowind to safety. They used the Argonian Mission in Ebonheart as a base of operations. Their head in Morrowind was Ilmeni Dren, the daughter of Duke Vedam Dren. They commonly used the phrase: "Have you seen the Twin Lamps?" to recognize fellow members, the answer required being: "They light the way to freedom."