< Lore: Factions: D
"Namiira's darkness swirls amid our dreams and doubts. All the evils of Oblivion rake their claws and gnash their fangs against the Lattice, seeking to take our old souls as a prize. Be cautious. Move swiftly. Hide your hearts away in the thick jungles of the self and think often of their great worth. For if you fail to hear the beating of your own heart, the beat of Lorkhaj's will take its place forevermore."
—Rid-Thar-ri'Datta 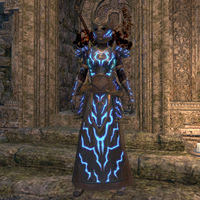 The Dro-m'Athra are a very dangerous and seductive reflection of the Khajiit.[1][2] They are Khajiiti individuals who become corrupted in life, resulting in their souls being claimed by Namiira. Upon death these souls are ultimately lost to the Daedric Prince.[3]

Dro-m'Athra have fur that is completely black, crossed by lines of glowing blue lightning.[4] Their eyes glow pale blue.[5][6] They pour into Nirni from the Dark Behind the World, where they dance to the pounding of the Heart of Lorkhaj.

The exact origin of the dro-m'Athra is obscure to the modern day Khajiit. Legends speak of warriors that went to war with the stars, but how this turned them into dro-m'Athra remains unknown.[1] In general their existence is explained with the duality of light and darkness,[7] which is uniquely present in the Khajiiti soul.[8] Just as the Khajiit are the children of Jone and Jode, the Dro-m'Athra are children of the Dark Moon.[1] Ancient scriptures predating the Riddle'Thar offer an origin, crediting their creation to Lorkhaj. After Lorkhaj's betrayal caused the other spirits to tear out his heart and cursed him to "walk Nirni for many phases",[9] he fled to Azurah with the hole in his chest. Azurah saw that Namiira still dwelled within his wound, keeping him alive and corrupting him by imitating his heart. The Dark Heart of Lorkhaj twisted Lorkhaj into the Moon Beast, the first of the Dro-m'Athra. Azurah cleansed Lorkhaj of the corruption and flung the Dark Heart of Lorkhan beyond the sea and into the void, and Lorkhaj perished within Azurah's embrace.[10] The shade of the Moon Beast is said to still prowl the edges of the Lattice and pounces on Khajiit who stray too far off the Path.[11]

"The moons shine brightly at night. But where the bright pale light shines, the darkness is that much deeper. As the people, as the Khajiit live in the light, so things live in the dark. These are the Dro-m'Athra."
— Ezreba

The term "dro-m'Athra" has numerous translations or meanings from Ta'agra, including Dark Spirits,[1] Ghost Cats,[12] Lost Cats,[4] Children of the Dark Moon, Children of Lorkhaj,[1] Children of Namiira, Namiira's Dark Litter, Bent spirits, and Moon-haters.[2] The short form of this name is 'mathra.[1]

Besides the dro-m'Athra, there are also Sar-m'Athra (or "Sa-m'Athra")[13][14], which are known as dro-m'Athra senche. Whether they are animal Senche or Khajiit Senche is unknown. Rahd-m'Athra are dark Horses that bear a striking resemblance to their Dro-m'Athra riders. They serve as mounts when the dro-m'Athra ride from the Dark Behind the World, although it is unknown if these horses are tangible creatures or simply spirits from the Dark Moons.[15] Dro-m'Athra skilled in the art of stealth are sometimes called dar-m'Athra.[16] Revered warriors taken by the bent dance (sometimes identified by the honorific -do) are occasionally referred to as do-m'Athra.[17] Similarly, powerful wizards taken by the Bent Dance are sometimes noted as jo-m'Athra.[18]

The dro-m'Athra exclusively appear in Khajiiti faith and culture.[19] They can be considered Daedra, insofar as the term means "not-Aedra",[20] although some regard this classification as misleading.[8]

Dro-m'Athra equipment utilizes design motifs bearing similarities to their own appearance. Their weapons and armor display repeating lines of blue lightning and the symbol of a waning moon, as this is the time they grow stronger until they reach the height of their power during the night of the new moon. This is mostly expressed by two waning moons—one for Jone and one for Jode. On dro-m'Athra staves, the Third Moon is also symbolized. The armor, especially the shoulder pieces, appear with many spikes. Atypical for Khajiit, their boots and gloves do not have open fingers or toes for their claws.[4]

Elsweyr is dotted with numerous old and forgotten temples where dro-m'Athra are imprisoned.[1][21][22] Such places can be felt vaguely by mages, such as Greenshapers.[23] Alternatively, dro-m'Athra can be summoned by rituals anywhere on Tamriel.[24] These summonings use either totems[24] or crystals.[21][25] Corrupted shrines to the moons also allow dro-m'Athra to boil up from the earth.[7] Knowledgeable mages also can directly conjure them.[26] 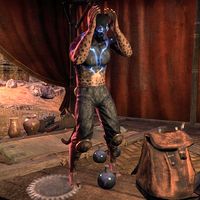 A Khajiit transforming into a dro-m'Athra

Normal Khajiit revel in the light of Jone and Jode[27][28][3] and follow the teachings of Riddle'Thar.[29] These Khajiit are called True Cats.[27]

True Cats can transform into Dro-m'Athra in several ways. The most common way is to be exposed to the Bent Dance (Zha'ja Lorkhaj), where only willpower can prevent a soul from giving in.[21] It is a dance without music, only following the rhythm of the beating Heart of Lorkhaj. Khajiit can be predisposed to susceptibility to the Bent Dance by flaws of personality or strong negative feelings.[30] These Khajiit are more easily able to hear the beating of the Heart of Lorkhaj or Namiira whispering secrets to them,[31] which will drive an individual to to corruption.[2][27][29] The consumption of Skooma can also increase one's susceptibility to the Bent Dance. Singing near Dro-m'Athra gives them a chance to twist the song to their tune and worm their way into a pure heart from there.[2]

The first sign of the Bent Dance's influence can be expressed through strong pain and hearing voices in one's head.[32][33] These symptoms are not limited to Khajiit alone, though other races cannot become dro-m'Athra, they can only be possessed by them.[34][25][24] For Khajiit in particular, it starts as a twitch of the tail and the victim hears a tune that others cannot.[35] They begin to move along with the beat, performing unsettling motions in tune with the Bent Dance.[35] As soon as a Khajiit falls to the Bent Dance, their shadows grow longer and their tail begins to twitch. As soon as the darkness outweighs the light of the moons, salvation becomes unlikely and the Khajiit is lost. They are then called Bent Cats, or Lost Cats. Their souls are then sent to the Dark Behind the World, to Namiira and Lorkhaj, where they will return upon being vanquished.[3][29][20]

Anyone can be possessed by a dro-m'Athra, but only Khajiit can become dro-m'Athra. This is due to the properties of the Khajiiti soul. They possess a sort of duality, and the capacity to make a choice that no other race has to make—they can either succumb to the Heart or not.[34] Unlike possessions enacted by normal spirits, the soul of one affected by the Bent Dance isn't driven out to make room for a new spirit. The Khajiit change physically as well as spiritually.[35] The most notable change lies within their fur, which turns black and begins to exude dark energies.[5] The Khajiit is twisted into a dro-m'Athra rather than being possessed by a spirit. When a Khajiit is finally turned by the Bent Dance, they usually begin cause harm on Nirn until they are banished.[35]

Bent Cats tend to display hatred for the gods venerated by the Khajiiti pantheon. Notably, they mock the bright moons, whose light drowns out the Great Darkness, Khenarthi, who carries True Cats to the Sands Behind the Stars, and Azurah, who is the symbolic mother of the litter from which True Cats are born.[36][37] All dro-m'Athra seek to unleash their hatred and pain upon True Cats, for it is all they have left.[38]

"Adara'hai has never seen a Bent Cat return to the true path. Never once has she heard another Twilight Cantor claim it possible. Those who have tried inevitably succumbed to their corruption.
All we can do is return them to the Darkness."
— Adara'hai, Twilight Cantor

The Khajiit just rarely speak of the dro-m'Athra, but when they do, it is only under the light of the moons.[2][20] Merely speaking of dro-m'Athra on moonless nights is feared, as it allows their creeping influence to take hold upon True Cats.[20] Khajiit who have been educated by a Clanmother or read children's stories should know about the existence of the dro-m'Athra. However, this knowledge is often just seen as fiction; stories to scare children into obeying their parents.[39][21] In temples of the Two-Moons Dance and other monasteries, the true knowledge of the dro-m'Athra and how to fight them is preserved and spread.[1][40][31][27]

The dro-m'Athra are strongest on nights when the moons are new.[4] Their influence spreads more rapidly the more victims they find at a given location,[25] or if the Bent Cats are supported by rituals or objects.[25][41] If a Dro-m'Athra is in possession of a living body, as happened with Akkhuz-ri and the Dark Mane, it can experience increased strength.[7][24] By using this power, a Dro-m'Athra can free other dark spirits from their prisons beneath the earth.[1][42] Dro-m'Athra can also possess non-khajiit.[24][25] As the Dro-m'Athra can generally make puppets of the dead,[43] they also sometimes kill the body they are in possession of and create an imperfect copy of it. Puppets created in this way cannot mimic speech.[44] A formerly possessed and duplicated body can be identified by open wounds that make it appear as if something tore its way out of it.[24]

The ways of opposing dro-m'Athra can be roughly separated into two methods: 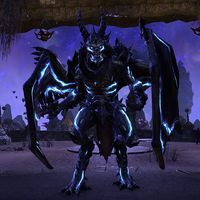 If the Bent Dance's influence is caught early enough, an exorcism can be performed to remove the Great Darkness from a True Cat's heart. Khajiit often describe an exorcism as "straightening the tail",[43] as opposed to the "twitching tail" symbolizing the corrupted.[3] The exorcism's success depends on how far the corruption has advanced, the dro-m'Athra's strength and the victims' own willpower. Twilight Cantors are generally called upon to perform these rites.[38] If a Khajiit is being corrupted by the Bent Dance, the Chase Away Song (S'virash Sahaala) can be sung to break it. However, if the corruption is too powerful, the song ceases to work.[29] For posessed Khajiit, violence alone can force the Dro-m'Athra to leave, freeing the body.[45]

Some Dro-m'Athra can achieve salvation via Necromancy as practiced by the Order of the Hidden Moon; they possess the bones of dead Khajiit, allowing them to fight for their true-spirited kin. If they can face the truth of their sins, and become illuminated by victory in battle to remember their true being, these souls can sometimes be freed from the grip of Namiira.[30][46] However, some dro-m'Athra resist purification through these means, and cannot be saved.[47]

When one who succumbs to Namiira's influence cannot be rescued, they must be fought. Dro-m'Athra cannot be killed, only banished.[38] Prayers, songs, ritual objects, or weapons are used for permanent or long-lasting banishment.[47] Prayers, often to the moons[48], can be wielded by moon-priests.[3][42] Sometimes, as the Twilight Cantors do, chanting and music are utilized to sing the Dro-m'Athra away.[2] Sigils and magical seals can be kept active in temples to repel Dro-m'Athra.[2][49] Ritual objects can also repel Dro-m'Athra who approach them. If such an object is charged with the essence of Dro-m'Athra and strengthened by a prayer to the moons, it can vanquish the Dro-m'Athra if it tries to possess the wielder's body.[19][24][50] The Moonlight Blade works in a similar manner. It bears an enchantment that charges by killing undead and bent spirits. Likewise, it allows the wielder to send bent spirits back to wherever they came from.[30][51] Holy relics such as Khenarthic Bells, which are rung in reverence to Khenarthi, can also be used to drive back the Darkness. The Khenarthic Bells of Black Heights on the Passage of Dad'na Ghaten are rung by the dying to announce their coming to Khenarthi, and their ringing can drown out the beating of Lorkhaj's Heart. To destroy a Dro-m'Athra completely, one must fight it in its home territory, in the darkness beyond the stars.[7]