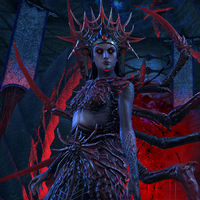 "As known in the West, Mephala is the demon prince of murder, sex, and secrets. All of these themes contain subtle aspects and violent ones (assassination/genocide, courtship/orgy, tact/poetic truths); Mephala is understood paradoxically to contain and integrate these contradictory themes." — Vivec and Mephala

Mephala (also known as Mafala to the Khajiit)[1] is a Daedric Prince whose sphere is obscured to mortals, also known by the names Webspinner, Spinner, Spider, Teacher of the Secret Arts, Queen of the Eight Shadows of Murder, the Anticipation of Vivec,[2][3] and the Queen of Oblivion.[4] Unlike many other Daedric Princes, who almost always appear as the same gender (e.g. Azura is always female, Sheogorath is always male), Mephala appears as either male or female depending on whom the Daedric Prince wishes to ensnare (though she's typically female). Mephala's only consistent theme seems to be interference in the affairs of mortals for amusement. Mephala's sphere seems to indicate a careful plan carried out through executions, each life a portion of a massive web. It is little wonder that Hermaeus Mora, the "Demon of Knowledge", is considered Mephala's sibling.[5] Ancient Khajiit considered her an ally to Azurah, Boethra, and Lorkhaj. They also believed that she was Boethra's lover.[6] Mephala's summoning day coincides with the Witches Festival, which falls on the 13th of Frostfall.[7]

Mephala sees the affairs of mortals as a weave; pull but one thread and the whole thing unravels. The Dunmer associate Mephala with more simple concepts—murder, sex, and secrets. Mephala directly helped to found the infamous cult/society of the Morag Tong, and they claim to murder for the daedra's glory. Some scholars also argue that when the Morag Tong was banished from the rest of Tamriel, they were allowed to continue to operate in Morrowind when they replaced their worship of Mephala with that of Vivec. As a reaction to this, the Dark Brotherhood was formed, being led by the mysterious Night Mother, who some insist is just another form of Mephala.[8]

Mephala is known as one of the "Good Daedra" of the Tribunal faith,[9] as well as one of the "strongest of the recognizable spirits" that emerged soon after Akatosh formed and time began.[10] Mephala's enemies include Ebonarm, Molag Bal and Peryite; allies include Malacath. The temperamental Spider Daedra act as servants.

In Morrowind, Mephala was the ancestor that taught the Chimer the skills they would need to evade their enemies or to kill them with secret murder.[2] Enemies were numerous in those days since the Chimer were a small faction. Mephala, along with Boethiah, organized the clan systems that eventually became the basis for the Great Houses.[5]

To the Khajiit, she is Mafala, the Teaching Mother, the Elder Spirit, the Keeper of the Ancient Secrets of Fadomai,[6] the Clan Mother of Dark Secrets,[11] and the Eight-Clawed, and once served as the recorder of hidden guilt and eternal shame. She was considered an ancestor spirit and a teacher of the old ways.[1] Her worship fell out of favor after the event known as the "Sinner Suicides".[11]

The Ring of Khajiit, sometimes named the Ring of Khajiiti, is an ancient relic, hundreds of years older than Rajhin, the thief who made the Ring famous. It was Rajhin who used the Ring's powers to make himself as invisible, silent, and quick as a breath of wind. Using the Ring he became the most successful burglar in Elsweyr's history. Rajhin's eventual fate is a mystery, but according to legend, the Ring rebelled against such constant use and disappeared, leaving Rajhin helpless before his enemies.[12]

The Obsidian Husk is a strange artifact said to be a fragment from Oblivion. Others believe it to be magical in nature, containing a trapped shred of Mephala's essence. Whatever its origin, its powers are formidable.[13]

The Spiral Skein is the realm of Oblivion created and ruled over by Mephala, the Daedric Prince of Lies.