The dreugh (/drɛɡ/) are an ancient species of aquatic, octopus-like beastfolk, commonly hunted for their hide and the wax scraped from their shells.[1] They are sometimes known as water dreugh.[2][3] A known variant of dreugh is the dreugh man o'war.[4] The dreugh live on land and in water during different stages of their lives. Dreugh are mostly mild-mannered, and usually scavenge for food.[5] Occasionally, dreugh will cut fishermens' nets while scavenging to steal the fish inside.[5] Dreugh are omnivores, and have been seen eating Elven flesh.[2] When hunting, they prefer dark, dank places from which to snatch unsuspecting prey.[6]

Dreugh are found mostly in northern, western and eastern Tamriel,[7] but can usually be found anywhere coastal that isn't in frigid waters.[UOL 1] They are known to inhabit the Inner Sea and the Abecean Sea, migrating into the waterways of the Iliac Bay.[5] Land dreugh can be found as far inland as Cyrodiil and Craglorn.[3] Dreugh are known to be immune to paralysis, poison and disease and resistant to magic, but have a low tolerance to frost. They can regenerate health in darkness and in water, but cannot enter holy places.[8] Their infamous shock attacks are unique to land dreugh, and those in the water must rely on melee attacks.[9] 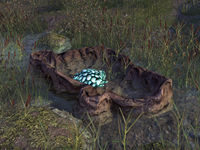 A dreugh nest, with eggs 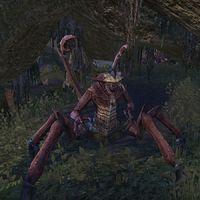 For one year of their life, dreugh undergo karvinasim and emerge onto land as aggressive crustaceans to breed. During this period they are known as land dreugh or Billies. Land dreugh carapaces are very sturdy, and can deflect most attacks from common weaponry.[2] They favor shoreline marshes and rivers close to the open water.[5] Dreugh are capable of channeling some form of shock energy through their bodies, and usually do this when defending their nests from invaders.[2] Most scholars agree this is a natural adaptation, and not magical in nature.[2]

Land dreugh lay eggs which are surrounded in a protective jelly,[10] then encase their eggs in mud.[2] It is thought that karvinasim heightens the dreugh's martial instincts, making them more aggressive.[5] Hatchlings are closely guarded, and broodmothers are extremely territorial.[5] Unlike their aquatic counterparts, the land dreugh show no signs of their usual intelligence and kill indiscriminately,[11] even going so far as to cocoon living victims in mud to feed their young.[12][13] Not much else is known about their nesting habits, and nothing at all is known about water dreugh nesting habits.[2] Dreugh are very protective of their eggs, and are unafraid of invading mortal settlements or destroying ships to find them.[14][15] If their eggs have gone missing, they can sense where the missing eggs are.[14][15] Fisherfolk occasionally harvest eggs from land dreugh mud nests, though this is a dangerous task.[2]

After their year on land, dreugh undergo meff, where they digest their unneeded skin and organs and vomit the congealed remains as small fibrous balls called "grom".[5] Grom is foul-smelling, and can make those with a weak stomach queasy.[5] There is no known alchemical use for grom, but boiling the substance allows it to be shaped to create potion flasks that don't break when dropped.[16]

The Dunmer use dreugh wax in alchemy for its modest magical properties,[1][17] and their hide to make traditional armor and weapons.[1][18] Waterstones are calcified deposits found in dreugh organs. They absorb fresh water, and may be swallowed to stave off dehydration.[19] Dreugh are sometimes hunted for their meat, which can be more easily extracted from the shell via the use of specialized tools.[20] It is described as smelling the same as lobster.[21]

Dreugh wax can be used to make candles,[22] boot polish,[23] and wax stoppers used to close open bottles.[24] Dreugh wax corkers are slightly controversial; some people who use them say they make drinks more flavorful, and others say it leaves a waxy aftertaste on the lip of the bottle.[24] Dreugh wax can also be used to make ladles whose only purpose is to spoon scrib jelly when cooking, as the jelly won't stick to the wax.[25] Dreugh wax ladles are useless in all other culinary applications.[25] Their wax is also used to treat netch leather armor, to keep it in fighting shape.[26] Dreugh claws can be used to make knives and ornamental objects, such as candle holders.[27][28] Grom is occasionally preserved in vinegar and stored in sealed glass decanters by the Dunmer.[29] Bright blue ink can be brewed from dreugh ichor.[30] Open-bottomed spoons made of Bogmother dreugh-shell are used in the Argonian ritual of the Empty Feast of Nullity.[31] Dreugh-shell is also suitable for making decorative plaques with which to mount trophies and other objects.[32] Rich, dark red pigment can be extracted from dreugh shell and used for a variety of artistic and cosmetic purposes, such as lip stain.[33] When mixed with mushrooms, dreugh excrement can be used to make repellant that drives dreugh (or anything that can smell) away from fishermen.[34] 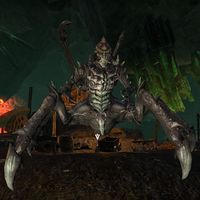 The origins of the dreugh are clouded in myth. In the Iliac Bay region, they are rumored to be the remnants of a prehistoric civilization from long before the First Era.[35] Some scholars argue that the land dreugh is actually a distant relative of the true dreugh from further back on the evolutionary timeline, perhaps even related to Spider Daedra.[11] The ancient Chimer once had dealings with the dreugh; Tribunal Temple teachings speak of the treacherous "Altmer of the sea" and their castles of glass and coral. It is thought that Altmer took these aquatic forms during the first of the formwars.[36][UOL 2] Their protracted conflict with Dunmer hunters is blamed for their devolved intelligence and the destruction of their civilization.[3] Legends tell of civilized land dreugh colonies which raised herds of mudcrabs as food stock.[2] These colonies purportedly built stone cairn houses and structures.[2] No evidence of such advanced behavior exists today, but the dreugh that inhabited Fungal Grotto in 2E 582 lived in conjunction with crabs.[2]

According to conflicting legends, the dreugh once ruled the world as tyrants, and Molag Bal had served as their chief. When the dead carapace of Bal's old image was dropped into the world from his interactions with Vivec, a Chimer child from Gnisis wore it to scare his village, but instead became the Ruddy Man. Vivec did battle with the Ruddy Man, and their fighting created the West Gash region of Vvardenfell. Vivec was victorious, and gave the carapace to the Queen of the Dreugh to guard; instead, the dreugh gave it to a wayward shaman of the House of Troubles, and the Ruddy Man appeared again ten years later at Tear. After defeating him a second time, Vivec gave the carapace to the devout and loyal mystics of the Number Room, who made it into "a philosopher's armor".[36] They are believed to have sieged the necromantic meatmerchants of Thras.[36][UOL 2] According to the teachings of Mankar Camoran, the tyrannical dreugh-kings ruled over Mundus and enslaved the oceans before Lyg was destroyed by Mehrunes Dagon.[37]

Circa 2E 582, a dreugh known as the Ruddy Broodmother began terrorizing the roads around Molag Mar, killing pilgrim and Buoyant Armiger alike. The Ruddy Broodmother made its lair within the Dreudurai Glass Mine, which the Erabenimsun knew as ancient dreugh spawning grounds.[6] The Vestige, with the help of a group of Ashlanders, drew it out of hiding and slew it. A pilgrim who survived the incident and fled into an ancestral tomb believed the creature to be the mythical Ruddy Man, though Ashlanders denied its existence, claiming that the Broodmother was simply a powerful and cunning dreugh. The Buoyant Armigers considered the thought of the beast being the Ruddy Man borderline heresy. The captain of the Buoyant Armigers at the time suggested that if the Ruddy Broodmother truly was related to the creature of legend, that it might be a lesser creature "cut from the same cloth" as the Ruddy Man.[38]

When the floating city of Umbriel arrived in 4E 48, the dreugh knew to flee from the sight of it.[39]