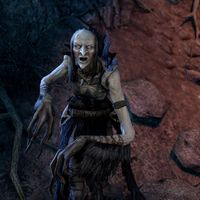 Hagravens are creatures of corruption and decay that appear as a horrific cross between an old crone and a bird.[1]:110 Usually they are extremely hostile to outsiders, but they retain the ability to communicate. They are equally dangerous up close or when casting spells from afar.[2] They can often be found in the company of Reachmen clans, who often revere hagravens as their Matriarchs and leaders, or dwelling in secret groves and lairs in the wilderness with other witches and hags.[3][4] Some clans actively revile and fear them, however.[5] Few creatures match the cunning, depravity, and repulsiveness of the hagravens. They will take through savagery what they cannot win through guile.[6] They are known for their foul stench.[7] They posses an ability to turn into a murder of crows and attack their foes from a hundred directions at once.[8]

Hagravens were once witches, but have undergone a ritual, trading in their humanity for access to powerful magic, and the transformations they undergo infuse their entire beings with some element of that power.[9] The Glenmoril Witches of Skyrim were known to be hagravens.[10] Hagravens consume people alive, and especially love eating fresh eyeballs.[11] The Daedric Prince Nocturnal is considered kin to the Hags and Hagravens.[12] The Crow Mother is a hagraven Daedra Lord who claims to be the "Nether-Niece" of Nocturnal.[13] This hag spawned the Crow Daedra, who make up the Blackfeather Court.[14]

Stone carvings with the imagery of Hagravens with a distended bellies could be found in 2E 582. It was unclear whether it represented a fertility idol or a gruesome depiction of a Hagraven devouring small children.[15]

Hagraven claws can be used in alchemical concoctions.[9] Drinking vessels made of hollowed Hagraven claw were believed to increase the effects of whatever alcohol it contains.[16] Quills made from Hagraven feathers are typically long and sharp. They are occasionally manicured and inset with silver.[17] One of such quills was known as the Black Quill. It was commissioned by Razotha Tale-Teller, a legendary Orc lorekeeper. According to legends her quill was enchanted by an Altmer wizard to ensure that any story written using this quill would never be forgotten.[18]

During the Wild Hunt spawned to kill High King Borgas in 1E 369,[19] the Reachfolk captured a Hagraven in Skyrim among the monstrosities that were spawned from the event.[12]

During this exile, Faolan the Red Eagle came across a mysterious and powerful hagraven, also known as simply the Hag in early works [20], who offered him the power to free his people in exchange for his heart. Red Eagle had to clear his mind before he could embrace his destiny and filled his heart with the thing he loved the most - his people.[21] He accepted the offer and became the first Briarheart,[22] becoming a spirit of vengeance, pitiless, and beyond remorse and bringing an onslaught of violence and death to the occupying Alessians led by Empress Hestra.[23]

The conflict between the Hags of Glenumbra's Hag Fen and the Beldama Wyrd is as ancient as the Hag Fen itself. The arrival of the Hagraven Mother Murk from the Reach upset the balance within the swamp, twisting the world around her. Her alliance with the Bloodthorn Cult led to an increase of abductions of women around the area to convert into hags or thralls.[24] This brought the attention of an adventurer, who with the guidance of the wandering Reach-witch Sibellec the Old, turned Mother Murk's magic against her, allowing her to be slain, and brought the Hag Fen under the control of the Beldama coven.[25]