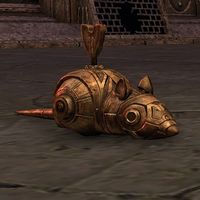 Skeevatons are fabricant creatures that, despite their name, resemble small rats rather than skeevers.

They take the form of a metal mouse with an extremity on their backs that resembles a key used to wind up clockwork toys. Skeevatons run on what appears to be a literal mouse wheel, which is seen detaching when destroyed. They drop Clockwork Oscillators, a trash item that can be sold to merchants for gold.

Skeevatons are rarely seen outside the Clockwork City and the Brass Fortress. Though they can also be found inside Frostvault in Eastmarch. Two skeevatons can be found in cages on the north side of the Shimmerene docks.

There is also a non-combat pet available, the Clockwork Skeevaton, which has a default name of "Skweex".

In Search of a SponsorEdit

During the quest, Neramo will have figured out a way for you and him to control a Skeevaton in order to infiltrate the Depository Documatis in hopes of finding vital information.

Your character is able to see from the skeevaton's point of view and control it so that for all intents and purposes, you become the skeevaton.

Later, you and your group members will be tasked with controlling skeevatons to disable shock conveyors during the battle.

Aside from the dialogue spoken about skeevatons during the above quests, Other characters have mentioned them:

We did have a skeevaton infestation once. Someone left the fabricator running and it spewed out thousands and thousands of the things. The apostles deployed clockwork cats to catch them, but then we had too many cats..."
So someone sent out clockwork hounds?
"Exactly. By the time Sotha Sil caught wind of it, the Fortress was packed full of wind-up bears and motorized tigers. Quite a scene.
The Clockwork God destroyed all of them... except the skeevatons. I like to think he has a sense of humor."

Burr: <Gnawing, frustrated Goblin noises.>
Landal Gevont: "Burr! Skeevatons are not for eating!"
Burr: <Exasperated goblin gibberish.>
Landal Gevont: "You shouldn't eat those either. Do you have any idea where they've been? Oh, you do …."

"This one thinks the little metal rat would make a good toy for her Senche-cousin's cub. Perhaps she will take one as part of her payment."

There are three achievements associated with this creature: