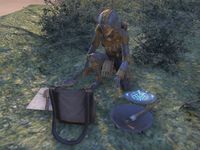 A player excavating an Antiquity

The Excavation skill line consists exclusively of passive abilities meant to assist in excavation for Antiquities. This skill line is gained by completing The Antiquarian Circle quest in Solitude.

It is leveled by excavating dig sites and completing achievements related to Antiquities. 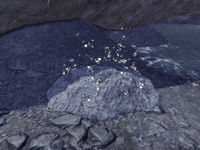 Successfully excavating an antiquity grants experience for both Scrying and Excavation. 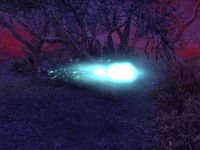 Antiquarian Eye at a dig site, pointing to the left

Once the Scrying puzzle is solved, players can travel to the marked location and perform an Excavation. These areas appear on the map outlined in cyan. Once at the location, you will need to find the place where the antiquity is thought to be buried. You can use the Antiquarian Eye found in the Tools section of your Collections (which may also be quick-slotted for ease of access) to create a comet-shaped orb of light which will show the direction of the excavation site by following where the thinner tail end of the light is pointing.

The excavation site will appear as a mound of dirt with golden motes of light coming from it. The Excavation passive skill Keen Eye: Dig Sites makes the mounds visible from some distance away, adding cyan wisps of light and a low droning noise as you approach.

Once you have found the dig site you can start excavating, which begins another mini-game where you must excavate the treasure from a 10 x 10 square of dirt. You will have a selection of tools to help you find the antiquity and a limited number of turns for a digging attempt.

On Advanced and higher difficulties, the game adds fissures to the grid. These are small plumes of smoke that take up a single tile. If they are disturbed by digging directly above them they will explode and damage the antiquity, regardless of their proximity to it. The red bar at the top of your screen illustrates how many hits the antiquity can sustain. If the number in that bar drops to zero while excavating, you fail the excavation and will have to find another one within the same general area. Antiquities can also be get damaged if they are struck by digging with the heavier tools.

The number of turns you have to excavate the antiquity is represented by a bronze bar at the top of the screen. It's displayed as an amount of time, but in practice, it actually represents the number of actions you can perform. Using various tools during excavation uses up "time" and depletes this bar.

The default amount of "time" you start with is 12h 0mins, which translates to 40 actions or turns. The difficulty of the excavation doesn't change this value. The number of turns you have can be increased with the Excavator's Reserves passive. At rank I, it increases to 45 turns and at rank II it increases to 50 turns.

The following tools can become available during an excavation: 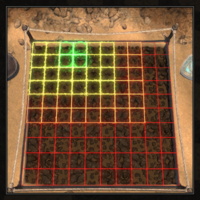 An illustration of the different colors and their respective range

Activating the Antiquarian's Eye allows you to use the Augur skill. With this, you can click on a square which will light up with a color to show how close you are to the antiquity:

The number of uses you get with Eye varies by Lead difficulty as detailed below. On higher difficulty Leads, if the dirt layer is too high the Eye will not be able to get a reading of the antiquity's location. You must first remove layers of soil to use the Augur. Alternatively, you can detect antiquities from lower layers by unlocking rank II in the Augur passive.

Hand Brush allows you to Excavate for Antiquities one square at a time. It generates Intuition, which is a resource that allows you to use other tools, such as Trowel and Heavy Shovel.

Unlike the other tools, the Hand Brush can only clear a single layer of soil, from a single square, at a time; this makes it time-inefficient, but it has the benefit of unearthing Antiquities without damaging them.

Hand Brush's upgrade doubles the amount of Intuition that you can have at once, allowing you to take double actions for the other tools when Intuition is at max. 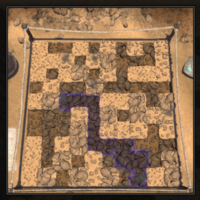 The Trowel is unlocked at level 2, and is used to remove three layers of soil from a single 1 x 1 square. To use it requires a minimum of two charges of intuition from the Hand Brush. It may damage the antiquity if you dig too far down. Using the trowel does not deplete the "time" bar at the top of the screen.

The Heavy Shovel is unlocked at level 4 and is used to remove a single layer of dirt from a 3 x 3 square - but can only remove layers if the depth is equal to the square that was selected. To use it requires a minimum of two charges of intuition from the Hand Brush. Rank II in the Heavy Shovel passive gives you a chance to consume no intuition when it is used.

Once the puzzle has been solved, the antiquity is revealed. You can continue to search for bonus items for the remaining turns you have left. These bonus items include minor loot, style materials or gold. The difficulty of the Lead determines how much bonus loot can be found before the mini-game ends. Green allows 1 piece of bonus loot, Blue allows 2, and so on.

Excavations for simple and intermediate Leads are relatively straightforward. Dirt can be as high as 4 layers and you get 8 charges of the Augur. The Rank I Augur can penetrate all levels of dirt to pin-point the treasure.

The antiquity usually takes up a 2 x 3 rectangle or a total of 5 square in the shape of a burlap sack, and only one or two pieces of bonus loot can be excavated before the excavation ends. If the antiquity is damaged 6 times it will break.

Excavations for Advanced Leads introduce up to 6 fissures that appear randomly across the grid, that can detonate and damage the antiquity. Dirt can be as high as 6 layers and you get 7 charges of the Augur. The Rank I Augur cannot penetrate the lowest levels of dirt, meaning at least one layer needs to be cleared before it can be used.

The antiquity usually takes up a 2 x 3 or a 2 x 4 rectangle, and three pieces of bonus loot can be excavated before the excavation ends. If the antiquity is damaged 4 times it will break. 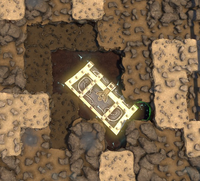 Excavation of a Master difficulty item

Excavations for Master Leads are expectedly more difficult and are usually reserved for Mythic Item fragments and some legendary Antiquity Furnishings. There are usually 8 fissures, dirt can be as high as 8 layers and you get 6 charges of the Augur. Even Rank II Augur cannot penetrate the lowest levels of dirt, meaning at least two layers needs to be cleared in some areas before it can be used.

The antiquity is usually aligned in a diagonal fashion, and takes up a total of 8 squares. Four pieces of bonus loot can be excavated before the excavation ends. If the antiquity is damaged 2 times it will break.

Excavations for Ultimate Leads are the hardest difficulty and are usually reserved for a selected range of legendary-quality furnishings. Fissures are more frequent and have a blast radius of 1 square surrounding them, meaning unintended chain reactions are possible.

Dirt can be as high as 9 layers and you get 5 charges of the Augur. Even Rank II Augur cannot penetrate the lowest levels of dirt, meaning at least three layers needs to be cleared in some parts before it can be used. If the antiquity is damaged twice, it will break.

This Elder Scrolls Online-related article is a stub. You can help by expanding it.
Retrieved from "https://en.uesp.net/w/index.php?title=Online:Excavation&oldid=2616424"