Enchanting is a crafting skill of combining runes to create glyphs, which are then used to enchant weapons, armor and jewelry.

Enchanting is a crafting profession in Elder Scrolls Online. You can use it to combine Runestones into Glyphs, which add magical effects to weapons, armor and jewelry.

In addition to glyphs, the Enchanting skill allows you to craft furnishings for your home.

The Enchanting skill line is granted the first time you activate an enchanting station.

Experience gained in a craft is called "inspiration".

For example: deconstructing a Common (white) glyph, not made by you, with a Repora and a Ta, with the +20% Inspiration Boost passive champion unlock, will gain you 4569 inspiration at any level.

Each level has a specific amount of Inspiration required before advancing to the next level as detailed in the table below. The amount required increases with every level, however the increase per level doesn't follow a set pattern. For example, consider the easy ascent from level 12 to 14, and the enormous leaps from level 38 to 40.

You can learn about this profession by speaking with some of the enchanters, "Can you tell me about enchanting?" They reply, "Of course! Enchanting is the art of empowerment. We gather runes found throughout the world and use our special instruments to assemble them into glyphs. These glyphs can be used to magically enhance worn or wielded items."

So, I'll have to find all these runes in the wild?: "Not exactly. Runes can be extracted from glyphs you find while adventuring. It's a delicate process, so you'll have to return to one of our work stations to proceed. Note that the glyph will be destroyed in the process. Unfortunate, but necessary."

In order to create an enchantment, you need three different types of runestone. These are Potency, Essence, and Aspect. Runestones can be harvested from nodes as you travel through the world, extracted from glyphs, or received in mail if you have the Hireling perks. Enchanters also sell Potency runes for gold. 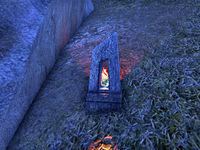 A single runestone provides multiple runes of different types. Essence and Aspect runes of all kinds can drop in all zones. Potency runes drop half of the time based on your level and the other half based on your rank in the Potency Improvement skill.

While standing at an Enchanter's table, you combine one Potency, one Essence, and one Aspect runestone to make a Glyph. Unlike Provisioning, you do not need a recipe. If your character doesn't already know what the runestones do, you will learn their effects while creating the Glyph.

The title and icon of the Glyph will tell you if it is for weapons, armor, or jewelry.

While you must be at an Enchanter's table in order to create a Glyph, you do not need any special equipment in order to enchant an item with the Glyph in your possession. You simply select the item you wish to enchant in the Inventory screen, and choose "Enchant". The Glyph you have must be of the correct type and an appropriate level for the item to be enchanted.

Special note about Armor Glyphs: Only Head, Chest, Legs, and Shields receive the full effect of an enchantment. Shoulder, Hands, Belt, and Feet receive only 40% of the stated value on the Glyph.

There are several traits which help to increase the power of enchantments on weapons or armor.

Armor traits are available on all articles of light, medium or heavy armor and shields. There is one trait related to enchantments.

Enchanting has an associated skill line that is revealed through use of the Enchanting profession. Abilities are listed below. Notes

Passive abilities are active all the time, and affect the outcome of Enchanting related activities.

The table below shows the amount of skill points required in order to max out the Enchanting skill line.

There are a number of achievements related to Enchanting.