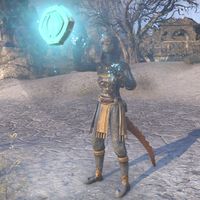 A player scrying for Antiquities

The Scrying skill line consists exclusively of passive abilities meant to assist in scrying for Antiquities. This skill line is gained by completing The Antiquarian Circle in Solitude.

It is leveled by excavating dig sites and completing achievements related to Antiquities.

Successfully excavating an antiquity grants experience for both Scrying and Excavation. 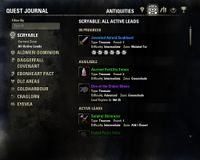 So long as the player is in an open world location, and not an instanced area such as a Dungeon, Outlaws Refuge, or the Greymoor Caverns, they can Scry a small selection of infinitely-cycling Antiquities. Alternatively, while adventuring through the world, they may collect Leads. Note that collecting leads is indiscriminate of owned DLC, so you may get a lead for something you can't even scry.

Once you're within a non-instanced area, open the Antiquities tab in your Quest Journal. Under the "Scryable" header, you will see the tabs Current Zone (which is the default) and All Active Leads. Current Zone gives you a visual of what leads you can scry and excavate in the zone you're in, so long as you've found the lead once before. Although you can only scry Antiquities in your zone, All Active Leads shows you all active leads, including those that have been scried and are ready for excavation.

The other headers are of the major content zones: through them, you can see how many Antiquities are located in the zone, which Antiquities you have already found Leads for, and the amount of codex entries each has so far. As a general rule of thumb, each Zone has one Simple, Intermediate, and Advanced Treasure, the latter of which is only obtainable once; they will appear once you have a sufficient Antiquarian Insight Rank and, for all but the former, after you Excavate an Antiquity of a lower quality.

Use the action button on the available lead in your zone, and it will bring you into the minigame.

A successful Advanced-Level Scry, with all six Foci claimed

The minigame interface is contained within the Antiquarian's Eye you were provided: a hexagonal grid with many shape-bearing facets and six empty, spaced-out facets— known as Foci— positioned near the Eye's edge. At the very bottom of the Eye is the crystalline Scry needle: starting from (or around) it, you need to click facets and expand your area of control to the Foci. You need to claim at least one of these Foci to succeed, which will turn into a white, glowing sphere when you connect a contiguous facet to your area of control.

Not all the facets share the same appearance, however: they vary in appearance, and can have 5 to 8 different variations depending on your Lead's difficulty level. If you click a facet that is near another of the same type, it will claim it as well— the same goes with any other contiguous facets. Some of your Scrying skills may either bypass this rule, like Farsight, be impacted by it, like Dilation, or contribute to it, like Coalescence. Pay mind to what a skill does before using it, so you don't accidentally make your job harder.

Your Eye has a limited amount of turns before it will automatically succeed (or fail, if you didn't claim enough Foci). It also has a limited amount of Magicka Charges, which control the use of scrying skills; once you use a skill, you will need to collect two unclaimed Foci to recharge it fully. The limits of both may be raised by Scrier's Patience and Future Focus, respectively.

Note that Foci claimed during the use of a skill count: this means that you can immediately get a Magicka Charge back if you manage to claim two in this manner. Skills that use Charges do not consume turns, meaning that you will need to balance both turns and Magicka Charges to claim as many Foci as desired.

Once you successfully scry an Antiquity, your map will be populated with blue-rimmed, highlighted areas, the numbers of which equal the amount of unclaimed Foci plus one (as an example: you will have four areas to explore if you only manage to claim three Foci). If you find the Antiquity site but don't go into the Excavation mini-game, and instead get a random Treasure, you will clear the selected zone from the map and update your Foci count. You may collect a ton of Treasures in this manner if you so desire, by intentionally claiming only a single Foci, but they will always be of Normal Quality.

You may continue to Scry the same Antiquity until you claim all six Foci, limiting your search to one.

The following tools can become available during a scry:

Each move consumes one turn; unless you are not trying to achieve perfection, it is best to pair this up with other abilities, such as Coalescence, Dilation, or Farsight. Unlike those abilities, however, Scry does not consume any Magicka Charges.

Coalescence allows you to change six facets contiguous to a facet in the center of its seven facet selection area. As this passive does not bring any facets into your area of control, it can be used anywhere, and does not need to envelop a full 6 facets to work. This passive is best used to bridge similar facets together.

Coalescence's upgrade extends the reach of this ability by one facet, from the north, northwest, southwest, south, southeast, and northeast points from the original selection area. This gives it twice the reach as standard Coalescence, changing 12 facets instead of 6.

Dilation allows you to claim facets that share the same type as a facet contiguous to your area of control. Unlike Scry, it does not claim all contiguous facets of the same type, unless it is upgraded.

Dilation's upgrade more or less combines the power of Scry to it, where it will catch all contiguous facets of the same type if it touches the targeted area of control.

Farsight allows you to claim up to four facets in a line, from a facet contiguous to a facet of your control. This can be done in any direction, and you do not need to select four facets in order to use it (which means a misclick can waste it). You can touch the area of your control from the side, but it will not allow you to select unless the starting facet is within a hexagon of your area of control.

Farsight's upgrade increases the amount of facets you can select to 6.

Scrying for Simple and Intermediate Leads are relatively straightforward. There are five different facet types, and each Foci is symmetrically aligned into two columns, with the closest ones being only four facets away. This means that one can use Farsight to immediately start off a Scry with a Foci collected. The vertically-aligned Foci also are only a few facets apart; this also means that a use of Farsight can claim two Foci at once, from making a vertical line from the top of the lowest one to the bottom of the highest one.

Simple and Intermediate Scries can be fully completed by only using Scry.

Scrying for Advanced Leads considerably changes the playing field. Not only are there six facet types now, the Foci shifted into two rows (as opposed to columns), with the closest one being two facets away. Vertically, the outer Foci are six apart, and the central ones three. Whereas the lower difficulty ones can be fully completed without the need to use Magicka Charges, Advanced Scries will need either decent-enough facet randomness or the use of skills to do so.

Unlike Simple and Intermediate Scries, Farsight cannot claim multiple Foci at once unless it has been upgraded. Furthermore, using the ability may be a waste of an initial Magicka Charge unless you approach the closest unclaimed Foci by its side.

Coalescence may, instead, be the best skill to open up a scry with: not only can it be used anywhere on the grid, it can also set you up with a chain of facets. Once you expand your area of control, Dilation functions remarkably well, as it has a wider reach than Scry while functioning similar to (or, if upgraded, better than) it. As mentioned before, Farsight still has its uses, but is far more useful upgraded unless your area of control is wide enough.

Master Scry, having a one-hex grid increase and horizontal asymmetry

Scrying for Master Leads is fairly similar in structure to Advanced Leads. There are now seven different facet types, though, and its horizontal symmetry has broken from the topmost Foci being shifted upwards. The closest Foci is still only two facets apart, but the grid's expansion has shifted the edge Foci to be seven apart, and the central Foci five. This means that Farsight can only complete two Foci simultaneously if it is both upgraded and used on the two central Foci. It also means that fully completing scries through Scrying alone is impossible without the use of Magicka Charges, and incredibly hard without upgraded skills.

A successful Master Scry, with two visible uses of Coalescence

The sheer reach of Coalescence makes it the best skill to use on these scries, especially if the grid has many groups of facets with the same appearance scattered about. An upgraded Dilation can also use expanded areas of control to the fullest extent, as long as you prioritize horizontal facet movement over vertical. Paired up with an upgraded Coalescence, these two skills can make Master (and Ultimate) scries far easier to complete.

Utility-focused passive skills have been largely unmentioned, but for Master Scries and higher, Scrier's Patience and Future Focus can be your saving grace— even at their base levels. The extra turns from Scrier's Patience, and the extra Magicka Charges from Future Focus, allows you to chain facet (and Foci) claims with far more room for error. Preemptive Power can also help a little bit, as it passively boosts your starting Scry reach a bit at the start of each round.

Scrying for Ultimate Leads is the hardest, as it has 8 different facet types. Not only that, the grid has expanded once more, with another horizontal row. The outer Foci are in the corners, at 9 facets apart, and although the central Foci are now only four, they have been shifted to the top. This means that the closest Foci isn't as much of a "free spot" as it used to be, and is now five spaces away from the standard Scry needle.

Like Master scries, you will have the easiest time fully completing scries if you have at least one or two maxed skills. Coalescence becomes an integral skill due to the amount of facet types there are. In a similar vein, Dilation can help you engulf large swaths of facets, but only if the facet variation around your area control is low.

It is highly advised to max Future Focus, as the extra Magicka Charges will allow for a better setup in your first Scry turn.