This article is about the skill line. For the House of Reveries member, see Alchemy (person). 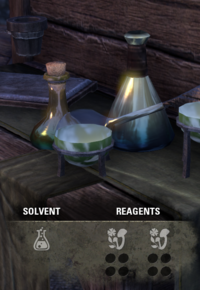 Creating potions in ESO involves combining 1 solvent with 2-3 reagents at the alchemy table.

Alchemy is a crafting profession in Elder Scrolls Online. You can use it to create many types of potions and poisons. You must be at an alchemist's lab in order to create any items. In general, potions provide you with a quick boost to Health, Stamina, Magicka, as well as other beneficial effects. Poisons were introduced in Update 10 and can be applied to your weapon, nullifying any enchantments but providing powerful additional effects.

Alchemy works similarly to previous games in the series, in that you do not need to find alchemy recipes before attempting to make potions. You are also able to eat potion ingredients to discover their first effect. Otherwise, you can try putting multiple ingredients with unknown effects together to learn their properties.

Making potions has been refined since Skyrim, and now requires two or three reagents plus a solvent. Using a more powerful solvent boosts the power of your potion. A water-based solvent creates a potion that you can drink to receive its effects, while an oil-based solvent creates poisons which can be applied to your weapons to cause negative effects on your enemies. While potions can be crafted in batches of 1-4, poisons are created in batches of 4-16 samples (depending on your Chemistry passive).

In general, you want to avoid negative effects when making potions, as these will only have undesirable effects. The Snakeblood passive mitigates these effects, but it's better to simply avoid them in the first place whenever possible. In poisons, all effects can be useful - negative effects will harm or debilitate your targets while positive ones will do the same to a lesser degree but also benefit you. Poison can be applied to any weapon, including Staves. Using a poison on a weapon will override its Enchantment until the poison has been depleted. Each strike has a 20% chance of triggering the poison's effect, reducing the poison charge on the weapon by one when it does so.

In addition to potions and poisons, the Alchemy skill allows you to craft furnishings for your home.

The Alchemy skill line is granted the first time you activate an alchemy station. You can increase your skill by crafting potions and poisons, learning all of the various effects for every reagent, and by completing Alchemist Writs or Master Writs. In addition, you can earn free levels in the skill line by reading Skill Books, which may be found randomly on bookshelves anywhere. The skill books which increase Alchemy are:

You can learn about this profession by speaking with some of the alchemists, "How does alchemy work exactly?" They reply, "Alchemy is the art of creating potions. We scour the fields and caves of Tamriel in search of reagents like mushrooms, flowers, and the like. Mixing these ingredients with a water solvent in the correct quantities can create powerful elixirs."

Plants and water? That's it?: "Well, not just any water will do. You'll find that some pools of water contain special qualities that make them ideal for potion-making. The grade of the water determines the potency of the product."

Does it matter what reagents I use?: "All reagents have hidden properties. When they are combined with other ingredients that bestow the same benefits, the potency is compounded. This reaction determines the nature of the potion. It's just a matter of experimentation, you see?"

Alchemy has an associated skill line that is revealed through use of the Alchemy profession. Abilities are listed below. Notes

Passive abilities are active all the time, and affect the outcome of Alchemy related activities.

The table below shows the amount of skill points required in order to max out the Alchemy skill line.

In ESO, two reagents with the same effect need to be combined in order to craft a potion. Be aware that when crafting potions, some combinations will provide a not always beneficial side effect. The Snakeblood passive will reduce (or with 3 points even eliminate) the negative side-effects, but it's better to simply avoid them if possible. All effects in poisons are negative, so there's no need to worry about unintended side-effects with poisons, though poisons with multiple effects will have the duration of all effects reduced. Remember that you have to also provide a solvent, which influences the strength, but not the effect, of a potion. As of Update 18, there are 151 two-reagent combinations.

Learning the Ability Laboratory Use enables you to use of up to three reagents. This opens the door to a large variety of multi-effect potions since each effect has to be present only two times within the reagents chosen in order to be applied to a potion. Listing all possible formulae for potions with three reagents would be rather pointless (there are 2302 such formulae as of Update 18) - those interested can use ESO Alchemy Calculator. To use three reagents to their full potential, you also need to understand how opposing effects work. See the Laboratory Use page for more details.

187 of the three-reagent formulae produce three effects (the primary one, which gives name to the resulting potion, and two secondaries). These formulae are listed below.

119 of the three-reagent formulae have the same effect on all three of the reagents. These are known as triple-effect formulae. The effect lasts longer than normally. The list of these formulae is provided below.

There are a number of achievements associated with Alchemy.