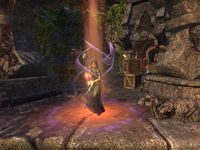 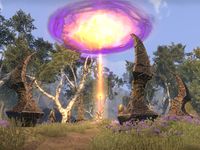 An active artifact spawn location
"Maces, swords, axes … whatever happened to bludgeoning someone to death with a wheel of cheese?"
—Sheogorath

Volendrung is an artifact associated with the Daedric Prince Malacath, stolen by Sheogorath to keep the other Princes on their toes and bring more chaos to the Three Banners War. It was added into the game with the release of the Elsweyr chapter. For more information on the backstory behind Volendrung, see the lore article.

A tutorial quest given by Sheogorath is available at the Alliance's Border Keeps, which allows the player to practice with Volendrung's skills with the exception of Sundering Swing. A player may re-enter Cheesemonger's Hollow at any time for further practice (see Related Quests).

The chaos of Cyrodiil reaches frantic new heights with the arrival of Artifact Weapons!

For reasons that no sane person can possibly fathom, the Daedric Prince of Madness Sheogorath seems intent on prolonging the conflict in Cyrodiil. To that end, he occasionally sends weapons of great power to Tamriel. Players who take up these weapons have their standard ability bar icons replaced by a suite of new and terrifying Artifact abilities! But these abilities-like all gifts from Sheogorath—come at a cost. Players must feed the weapon Alliance Points to maintain their hold on it. These Alliance Points are tracked in a unique meter found in the player Ul. Points acquired from sources other than quests and repairing structures will fuel the weapon. If the meter is fully depleted, however, the weapon turns on the wielder, killing them and stripping them of their Artifact powers.

Players wishing to experience the power of Artifact Weapons in a less competitive atmosphere can do so in Cheesemonger's Hollow—one of Sheogorath's pocket realms. Portals to this bizarre testing ground exist at the Northern Morrowind Gate, Southern High Rock Gate, and Eastern Elsweyr Gate in Cyrodiil.

The legendary hammer, Volendrung, fuses Dwarven ingenuity with the seething wrath of the Daedric Prince Malacath. Its true nature and complex loyalties remain a matter of intense debate, but in the hands of a skilled warrior, its power is undeniable.

The weapon spawns 4-5 times per day in each campaign, and when it spawns, an on-screen notification will appear stating "Volendrung seeks a wielder." If 10-15 minutes go by and no one has retrieved the hammer, or someone retrieved the hammer before then, an on-screen notification will appear stating "Volendrung is revealed." The hammer's icon will then show on the map and will remain for the duration of the artifact's stay. The hammer may change hands several times, and its map icon will change color to correspond to the faction of the wielder. If it does not have a wielder, the icon will be white. After a period of about 30 minutes, or after it changes hands about 4-5 times, Volendrung will despawn once dropped. This is indicated with a message stating "Volendrung returns to Oblivion." If an enemy drops the hammer and it isn't picked up within 5 minutes, it will respawn back where it was originally retrieved from, if it was not yet time for it to despawn.

The various spawn locations for Volendrung are visually distinctive. Each location has a circle of spikes protruding from the ground and a group of three golden saints guarding the area. If Volendrung is in a specific spawn location, it will be indicated by a rift with a ray of light shining down on the artifact. A total of 23 of these locations can be found throughout Cyrodiil, however, the artifact will only spawn in the locations closest to each faction's Border Keeps; for each faction, 1 of these spawn points is behind their scroll gates, while the other 2 can be found close outside. The weapon is inclined to spawn closer to the Border Keep, with the area behind the scroll gate being the most likely spawn location. The artifact spawn locations found in the inner area of the map were added in v5.0.1 to allow for multiple Volendrungs to be up at once for testing purposes, and can be ignored.

Volendrung does not discriminate and disregards any sense of fairness, therefore factors such as campaign scoring are irrelevant when it decides to spawn in an alliance's territory. When the hammer is disabled in a campaign, it is stated in rule set located in the Campaign tab. Currently, only Standard No-Cp Cyrodiil does not allow Volendrung.

When Volendrung is taken, butterflies will briefly swarm around the wielder, who will be clearly recognizable by a bright orange and purple aura. As Sheogorath put a curse on the artifact, in order to continue using the artifact, the wielder must earn Alliance Points, either by killing other players, or attacking enemy-controlled keeps and resources; otherwise, they will be killed by its power. Players have a 3 minute grace period before the hammer needs to be fed. The artifact's hunger level is indicated on the meter located on bottom right of the user interface. Note that repairing keeps or resurrecting other players does not count, nor do alliance points earned by other peaceful means.

If Volendrung is dropped, the same rift it spawned with will appear over its location to indicate that it can be retrieved. A player attempting to pick up Volendrung is vulnerable to crowd control effects for the several seconds required to take the artifact. If a player has crowd control immunity, bashing them will still work regardless. The silencing effect from a Sorcerer's Negate Magic ultimate will also prevent enemies from picking it up. A player will be prevented from picking up Volendrung if they have Bone Goliath Transformation, Overload, or Mend Wounds active.

Volendrung will personally not allow an Emperor to wield it, nor will the wielder be allowed to carry both the hammer and an Elder Scroll at the same time. Volendrung cannot be collected from stealth, and the wielder cannot enter stealth. It is, however, possible to use mounts, transitus shrines, and keep recall stones to travel across the map with the hammer. You are not permitted to teleport to any of the capturable towns, nor allowed to travel to any of the Border Keeps while in possession of the weapon.

Wielding Volendrung replaces your skills with a set of unique artifact skills, increases all stats, and prevents switching to other skill bars. While the wielder will no longer benefit from Battle Spirit, they will be able to use their set bonuses, glyphs, and poisons. Choose your equipment wisely before picking up the hammer, or you will be met with the message "You cannot modify your equipped items while holding an Artifact Weapon."

The Volendrung skill line is available for as long as the weapon is wielded. Skills include:

These abilities must be activated manually, for a cost of Ultimate.

The following effects are unique active effects which require the player to complete certain criteria(?) to activate, and are unique to Volendrung.

There are two achievements associated with this artifact:

2,000,000 Alliance Points at the associated vendor in Cyrodiil. These vendors can be found at the inn at a faction's base. The Dominion's merchant is Athrahgor, the Pact's is Listens-to-Sea, and the Covenant's is Rohzika.