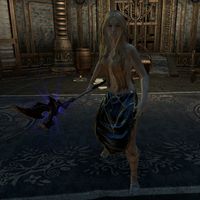 A Shrike with blonde hair

Shrikes are a race of towering pale-skinned humanoid Daedra in service to Nocturnal. They have red eyes and resemble female humans, scantily-clad with long hair covering their breasts.

They can be found in certain areas of the Clockwork City, especially the eastern region, and within Nocturnal's realm of Evergloam, often accompanied by Gloam Hags, Grievous Twilights, and Whispering Shadow cultists. When in Nocturnal's realm, they appear to possess the ability to turn people into the Night Terrors; which they are seen doing to hapless Whispering Shadow cultists.