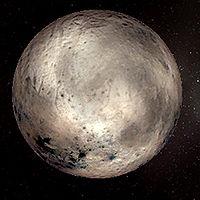 The lesser of Nirn's two moons, Secunda, Jone, Shandar's Sorrow (also spelled Stendarr's Sorrow) is acknowledged as one of the attendant spirits of the mortal plane, and, as such, is both temporal and subject to the bounds of mortality.[UOL 1] Secunda, which exists as a separate plane, has long since perished; it was Secunda's death which led mortals to perceive it as having both texture and limited size, as well as imperfections of color, all of which are the results of its decay from its former investiture of pure white.[UOL 1]

On the 8th of Sun's Dusk, the Moon Festival is held by the inhabitants of the Iliac Bay to honor Secunda as the nights start to get longer.[1]

While regarded by various cultures as an attendant spirit of their god planet, minor god, or foreign god, Secunda is not displayed within Dwemer orreries,[UOL 1] neither does it hold a position within the pantheon of Imperial gods. In Khajiiti culture, walking the Path of Jone and Jode is a necessary step for a Lunar Champion seeking to become the Mane.[2] The Bosmer regard Jone and Jode as spirits of fortune, both good and bad.[3]

When Hircine's Great Hunt is hosted on Nirn, Secunda turns a deep shade of red and becomes the Bloodmoon. The hunt is believed to end when the Bloodmoon disappears. The Bloodmoon is said to symbolize the blood of the Hunter's Prey, and those wishing to join the Great Hunt craft rounded bone pendants that are stained with blood to symbolize it.[4][5]

Secunda received its title from the Aldmer, who knew the plane as Jone ("Little Moon God").[3] Similarly, Secunda finds itself invested with a position of authority and reverence among the Khajiiti pantheon, as its phase at the time of their birth - along with that of Masser, the greater of Nirn's moons - determines their form.

In Khajiiti culture, the First Secret given to Azurah by her mother Fadomai gives her dominion over the three moons, Jone, Jode,[6] and the Dark Moon.[7][8]

In pre-ri'Datta Khajiiti culture, Jone is known under the title of the Ever-mourned, and is one of the two stillborn twins of Fadomai. As Fadomai was dying, Khenarthi didn't want her mother to despair in knowing of her twin's fate, and kept it to herself.[9] The twins are known as the Twin Lanterns of Jone and Jode.[9] Jode is known as the lantern of love, whose "as hot and red as summer solstice", and its twin Jone is the lantern of mercy, who is as "cool and pale as a winter moon".[10][11] These lanterns were lit to give the illusion of their eyes being bright and full of life. Khenarthi then embraced them and rocked them in the sky until her mother passed. Azurah looks after them now and ensures their fires are kept lit,[9] while the spirit Alkosh ensures their movement with the tapestry of time, ensuring that they are not locked in place to prevent the undesirable from slipping through the Lunar Lattice.[11] The Twin Lantern's love for the Khajiiti people is expressed through Moonlight and Moon Sugar. [9]

After Azurah cleansed Lorkhaj of Namiira's corruption, Azurah embraced her brother until he died. She made a funeral pyre before the Varliance gate, and lit it with the Twin Lanterns of Jone and Jode.[9][12] Her tears fell upon the pyre and the ashes scattered across the Lattice.[12] As a result, it is said Azurah can call upon the "true spirit" of Lorkhaj to appear.[9] Sometime before the "first memory" of the Khajiiti people, Azurah used the Twin Lanterns to summon Lorkhaj's true spirit[9] to be a sky-guardian as the third moon.[7]

The Lunar Lorkhan suggests that Masser originated as one of the halves of Lorkhan's "flesh-divinity", cast within the bounds of Nirn at the time of his destruction, and thus, is a personification of the dichotomy that Lorkhan legends often rail against ideas of good versus evil, being versus nothingness, and so on. It is believed that Masser was thus purposefully set in the night sky as Lorkhan's constant reminder to his mortal issue of their duty.[13] The War of Manifest Metaphors contradicts this claim.[14] Additionally, both modern and ancient Khajiiti religion places the two moons as separate entities that existed prior to Lorkhan's punishment at Convention,[6] and only believe that the third moon, the Dark Moon, is Lorkhaj's corpse.[15][16][17]

There's an ancient legend about a master jumper from Quin'rawl named Anahbi, who leapt from Nirn and almost fell into Oblivion, but was caught by Jone and Jode. Anahbi quickly took the light from Jone and leapt for Nirn again. The two moons had followed suit and danced across the skies to grab her. When they caught her again, she stole the light from Jode and tried to escape again, but they were able to restrain her. Anahbi promised to never do it again if they returned her home, and as a reminder of her promise, her brow bore speckles of stardust.[18]

A Bretonic story tells of two star crossed lovers, Shandar and Mara, children from different villages at war with one another. After seeking to run away from home, they were caught by the guards, and Shandar was imprisoned, while Mara was put under house arrest. Her father arranged a marriage to prevent the pair from getting married, which was further escalated by Shandar being scheduled for execution for daring to love Mara. Learning of this, Mara escaped into the wilds in the dark of night, at a time period where the moons didn't exist and so was kidnapped by an Orc during her sleep which planned to devour her.

The village learned of Mara fleeing from her home, yet they were too frightened to seek her out and confront the Orc. Shandar begged and was given the chance to go, but the village after gaining their composure realized that it was a mistake to send a child to confront a monster. They came across a clearing, seeing the corpse of the Orc and a mourning Mara holding the severed head of Shandar. With Mara's tears flowing down at his head, Shandar prayed to his lovers' namesake, and the goddess Mara responded. She did not have dominion over the death, and thus could not resurrect Shandar, but sought to keep their love alive. The goddess Mara reached down from the heavens and placed Shandar and Mara in the sky, and the lovers are now known as the moons Mara's Tear (Masser) and Shandar's Sorrow (Secunda), illuminating the night to keep away the evils that lurk.[19] This story fits the themes of the pre-ri'Datta Khajiit, with the moons fitting the sphere of the children's namesake, with Mara's Tear being a lantern of love, and Shandar's Sorrow being the lantern of mercy.[19]