Anequina Sharp-Tongue (translated from Ne Quin-al Rass Le in Ta'agra)[1] was a well-renowned Khajiit queen that was active during the Merethic Era of Elsweyr. In her time, she was the moon-priest and queen of the Ne Quin-al prides that roamed northern Elsweyr. But most importantly, she was the boon companion of the Mythic-Hero, Khunzar-ri and his Kra'Jun, playing a vital role in preventing the Dragons and later the Betrayer's plot to harness the lunar energy of Jode. She is the namesake of the modern-day name of her domain, Anequina.[2]

Born as Ne Quin-al Rass Le, she became the queen and moon priest of the Ne Quin-al Prides, an early iteration of the ancient kingdom of Anequina during the Merethic Era. She spent her time as a priestess in the temple of Jode's Light, on the borderlands near Dune, often to reflect.[3][4] She eventually came into contact with the mythic-hero, Khunzar-ri. In their travels together, they became occasional lovers, accomplishing many heroic deeds across the kingdoms. One such story involved their trip to Khenarthi's Roost, which is painted in many different ways, depending on perspective, but one version paints Anequina as the true hero. A pirate band of Maormer captured the daughter of a moon-priest and later Khunzar-ri, who approached them recklessly. The queen walked into their camp and approached the sea-captain, Linvalor and his officers, who were gambling over a game of Deciever's Disks. Anequina challenged the sea-captain to a game, for the freedom of the moon-priest's daughter and her companion. The game that followed suit was intense and Anequina won by cheating the game, promising another game in a year's time.[1] 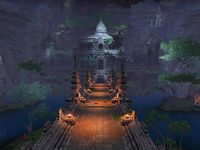 Sometime later, the Dragon-Lord, Kaalgrontiid and his rage of dragons approached the sixteen kingdoms, proclaiming their incursion over the regions and take the lunar energy of the moons for themselves. Khunzar-ri stood against the northern demons and gathered companions, his Kra'Jun, to help in his fight against the threat. His third champion was Anequina Sharp-Tongue, whom he used his sweet words and flattery to have her join in his quest. Once everyone was together, Khunzar-ri and the Kra'Jun engaged in battle, lasting for forty-one days and nights, all across ancient Elsweyr, with many wins and losses back to back. The Nedic knight, Cadwell suggested that they trick the Dragons by faking their surrender and giving them the moons' energy, or as Khunzar-ri, have the moons absorb their energy. Queen Anequina set to work with the priesthood of Shadow Dance Temple, using the Dance of Shadows to maneuver the moons into alignment, and siphon the invaders' essence.[5] With her dance, she was able to utilize the powers of Jode and open a path to its core, where they were severely weakened. And using his wit, Khunzar-ri was able to seal the Dragons in the Halls of Colossus, where they remained for several millennia. The threat was stopped, for a brief moment.[2][6] Cadwell killed Khunzar-ri behind his back and sought to harness the stolen energy to attain godhood and ultimate glory. He had cut a bloody swathe through the Shadow Dance Temple, in the hopes of attuning the moons to his bidding but Anequina and the remaining companions ended his plot for power.[2] 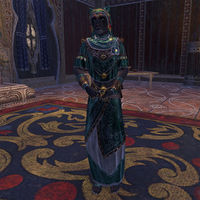 Queen Khamira, Anequina's descendant who bore a striking resemblance to her

Anequina continued her service as the Queen of her pride, spearheading their campaign in the First War of the Prides. They were considered the strongest in the conflict, and to pay homage to her, they took up her name, Ne Quin-al.[4] Her legacy lives throughout the sovereignty of modern-day Anequina, specifically those that lived in Rimmen. Queen Khamira, who was active during the Interregnum, was a descendant of Anequina.[2] Cadwell noted that she looked very similar to Anequina.[7]