Serana will want to speak to you after the Moth Priest reads the Elder Scroll, saying she may know where to find one of the scrolls. She thinks her mother, Valerica, may have information on it, and possibly may even possess it. After going through her dialogue, Serana believes Valerica may have left a clue at Castle Volkihar, in the courtyard. You will not be able to enter through the Keep, but there is a secret entrance used by the previous owner to obtain shipments. Note that if you have a follower at this point, you must dismiss them. Simply telling them to wait is not enough. Serana won't accompany you unless you send your follower home, and you'll need her later on.

When you reach the castle, head left, along the coastline. Serana will mention you're getting close to the entrance. When you reach the castle's old docks, you will be attacked by skeletons (more powerful than average skeletons). Once you enter through the secret entrance to the castle, you will have to fight your way through death hounds, skeletons, and a feral vampire. After dealing with the feral vampire, you will arrive at a stone archway blocked off in the western corner of the room. Ignore this for the time being and proceed instead up a set of stairs on the opposite corner of the room, which will lead you to a lever needed to lower the bridge blocking passage through the stone archway. Once on the bridge, take a left as instructed by Serana. This leads into an open area inhabited by death hounds. Afterwards move up the stairs in the southern section of the room which takes you into a tunnel. Eventually you must fight a giant frostbite spider and pull an additional lever to lower a bridge, allowing access to the courtyard. Just before you hack through the web to reveal the giant frostbite spider, there is an adept-locked chest to your right hidden behind more spiderwebs. If you don't go right into the room ahead, the giant spider can be killed with long-range attacks as it's too big to come down the small tunnel. When you reach the courtyard Serana will tell you there is something strange about the moon dial, and you have to find all three missing pieces and place them in the moon dial for a secret entrance to open. 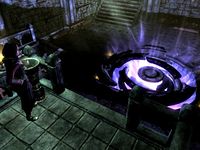 Serana opening the portal to the Soul Cairn

Afterwards, you will have to continue fighting gargoyles and skeletons until you reach a room with gargoyles and a fireplace. Serana will tell you there must be a secret entrance somewhere. Turn the candlestick near the fireplace or pull the chain behind the gargoyle to reveal the door (there is a vampire royal armor near the shelf to the right). Inside the laboratory you will need to search for Valerica's journal which is located on the central bookcase to the right of where you entered. After Serana reads it, she will tell you to find certain ingredients which can be found in the laboratory:

All of these items are in silver bowls, and will be added to your miscellaneous inventory when you pick them up, as they are considered quest items. These are the items you must have; normal bonemeal, soul gem fragments, and void salts will not work.

Find them and place them in the vessel in front of the portal (Serana will typically wait for you beside the vessel, making it easier to locate). Serana will then add her blood to the mixture and the Soul Cairn portal will start to open. If you are not a vampire and you attempt to enter the portal, it will leech some health, so return to Serana.

Serana will tell you to enter the Soul Cairn you must be "dead". She will then give you a choice:

Choosing either will allow you to enter the Soul Cairn.

This Skyrim-related article is a stub. You can help by expanding it.
Retrieved from "https://en.uesp.net/w/index.php?title=Skyrim:Chasing_Echoes&oldid=2574360"