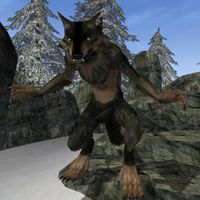 If you play the main quest, you will start hearing rumors about the Bloodmoon Prophecies, and while wandering Solstheim at night, you may encounter werewolves. There are random werewolves in the wilderness and in caves, as well as scripted events.

Werewolves are humanoids that have great strength, speed and endurance. As strong as they are individually, they become lethal in packs, so some form of crowd control is recommended (Paralyze or Calm Humanoid). Silver weapons are extra effective as they do double physical damage and fire-based effects are less likely to be resisted. During Hircine's Hunt, you'll fight many packs of very strong werewolves, unless you are one yourself.

Becoming a werewolf is simple, and parallel to becoming a vampire on Vvardenfell: fight one (it can be either in human or werewolf form) and contract Sanies Lupinus; after waiting for three days with this disease, you will become a werewolf.

The easiest way to become a werewolf is by progressing through the Main Quest and not obtaining a cure after being informed that you have the disease during the quest The Siege of the Skaal Village.

You can likewise become a Werewolf by trying to find one of the elusive wandering werewolves or putting on Hircine's Ring, which will give you the same special abilities.

Unfortunately, finding werewolves around Solstheim is not very easy; there are only nine in existence outside of the Main Quest. Wandering werewolves are found in human form during the day (between 6am and 9pm), with the name "Raving Lunatic", "Confused Lunatic" or something similar. During the night (9pm to 6am) you'll find them in werewolf form, and should exercise caution when approaching them.

There are several werewolves found during the main quest. The attack during the Siege of the Skaal Village ensures that you will encounter at least seven, and contract Sanies Lupinus. If you cure yourself after the siege, ten werewolves will appear in the Tombs of Skaalara during the quest for The Totem of Claw and Fang. There is a total of 40 werewolves to be found during Hircine's Hunt. Lastly, there is the werewolf that you create during the cure quest.

Every night you will have a vision of Hircine, and after that, you will be in werewolf form and will have to kill an NPC that night, or you will lose large amounts of health the following morning. While in werewolf form, you will have a permanent Detect Animal for 4000 points around you; however unlike the regular Detect Animal spell, this shows only NPCs on the Map (seeing as you need to kill an NPC every night to maintain your health, this is quite handy). You will also have 25 points of Night Eye. Your inventory is inaccessible and you cannot interact with anything (no looting, opening, unlocking, talking, etc.). Your only weapons when in werewolf form are your claws (they damage health instead of fatigue despite technically being considered your hands); you also can't use magic.

Your attributes and skills are set to the following values, regardless of what they are in normal form: 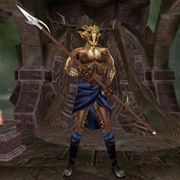 Hircine, Daedric Lord of the Hunt and Werewolves

Additionally, your inventory weight is ignored, run speed is increased by 50%, and jumping distance is increased.[verification needed — This function?] Damage with a fully drawn Werewolf claw is normally equal to 125, or 175 if the Dream of Hircine quest has been completed.

Normally, no one will know that you are a werewolf, but if you are seen transforming by anyone (even if you kill them immediately afterwards), all of Tamriel will know you are a werewolf and will usually attack you on sight even during the day. Each morning, you will transform back as you were before the transformation, except all of your equipment will be removed.

You get Hircine's Ring at the end of the Main Quest, during Hircine's Hunt. If you put Hircine's ring on, you will turn into a werewolf for around six hours. You won't suffer from bloodlust, so you won't lose health if you don't kill anyone. But if you put it on while NPCs are looking, the world will still know you as a werewolf.

If you've had enough of being a blood-thirsty lycanthrope every night and want to revert back to normal, all you have to do is obtain and follow the werewolf cure quest: Rite of the Wolf Giver.

First person perspective as a werewolf

Solstheim is a good place to live as a werewolf because Berserkers and Fryse Hags make great re-spawning sacrifices. You can leave your house at eight (an hour before you become a werewolf), and sit around for a while away from anybody that may spot you. When you transform, you can maul a couple of Fryse Hags or Berserkers, and then wait until you become human again and resume your normal life.

Using any non-instant transport can be tricky because you may transform during the journey. Travel early in the day.

As a Werewolf your athletics are increased, so swimming becomes a viable method of travel.

Back on Vvardenfell, living as a werewolf is not as tough as it might seem. There are plenty of places to hide and plenty of people to kill, but there are fewer bandits and re-spawning no-name NPCs. Guards, though, if lured from the safety of their towns, make good victims.

Living as both a werewolf and a vampire is tough, as the disadvantages of both add up. Travel and general interaction with people become pretty limited, for instance, and you take sun damage and must kill every night. The stat increases, however, are considerable.

Most Werewolves seen in the game are actually NPCs, not creatures.

* This one seems to be a non-implemented test creature. It doesn't even have any attack animations, so all it can do is walk around. It is also not referenced within the construction set.

All NPC Werewolves are scripted, mainly for changing their form during nighttime. Because they are NPCs, they cannot be soultrapped, but they can fulfill your need for a nightly kill if you are in werewolf form. Apart from being werewolves, they all keep their individual abilities during their transformation.

All of the elusive wandering werewolves, except for one Battlemage, are Barbarians (levels vary from 50-100). Their races are: 1 Orc, 2 Nords, 1 Dark Elves, 2 Imperials, and 2 Bretons. The reason they are so elusive is that they are scripted to appear depending on your level; for example if you are level 35, you have a 35% chance to see one. All of them have at least one of these words in their name during the day: Confused, Gibbering, Insane, or Wandering. After dark if you come within spotting distance of one, a red light appears around it and it attacks.