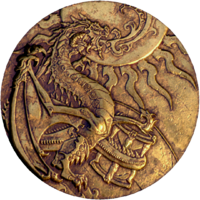 Alkosh depicted alongside his Hourglass

Alkosh is a pre-ri'Datta Dynasty Anaquinine deity, also known as the Dragon King of Cats,[1][2] the First Cat,[3] the Highmane,[2] and the Great Cat King of Time.[4] He is depicted as a fearsome dragon, which the Khajiiti say "is just a real big cat".[1] He is the god of Time,[3] a variation on the Altmeri Auri-El, and thus an "Akatosh-as-culture-hero" for the earliest Khajiiti. Alkosh's worship was co-opted during the establishment of the Riddle'Thar, but the Dragon King remains popular in Elsweyr's wastelands.[1]

The Khajiit believe the Dragon Break phenomenon occurs when Alkosh has been broken.[5] In some pre-ri'Datta beliefs, Alkosh is said to have appeared after the disappearance of Akha and took over the role of the First Cat. While he ruled over the children of Akha, he was soon overthrown and his body scattered on the West Wind. It was Khenarthi who put Alkosh back together, and now they both "safeguard the Many Paths from the wayward children of Akha".[2]

It is said Alkosh repelled an early Aldmeri pogrom of Pelinal Whitestrake during mythic times,[1] by shouting the invader off the summit of Sunspire and out of Elsweyr, leaving behind a "wound" in the sky.[6]

It is common among the Khajiit to fashion wooden religious fetishes that depict Alkosh as reclining cat with its jaws open wide.[7]