A Crimson Shard of Moonshadow 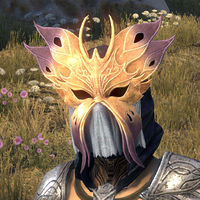 "Too much beauty [...] I am half blind. I see flowers and waterfalls, majestic trees, a city of silver, but it is all a blur. The colors run like water. It's raining now, and the wind smells like perfume. This surely is Moonshadow, where Azura dwells." — Morian Zenas, from Seif-ij Hidja's The Doors of Oblivion

Moonshadow is a realm of Oblivion created and ruled over by the Daedric Prince Azura, Queen of Dawn and Dusk.[1][2] The realm is said to hold "too much beauty", so much so it can render mortal visitors "half-blind", and contain flowers, waterfalls, pink trees,[3] and a city of silver. Azura herself resides in a rose palace, and is welcoming to mortal travelers.[1]

To the Khajiit, Moonshadow is where Azurah tends the Gates of the Crossing—the bridge between Nirni and the afterlife beyond.[4][5] According to myth, as Azurah wept in the Great Darkness after the death of her mother, the light from her tears chased away the Darkness and eventually left a "place of moonlight and shadow".[6] Khajiiti mythology also writes that when Magrus fled from Boethra and Lorkhaj after the former had plucked his eye out,[7] he fell into the Moonshadow. There, Azurah judged him as too fearful to rule a sphere, and tore out his other eye. The blinded Magrus fled to the heavens, and Azurah made of his eye a "stone to reflect the Varliance Gate".[8]

During the Second Era, the Ashlander inhabitants of Ald'ruhn had come into possession of several Crimson Shards of Moonshadow, large red crystals which glow with a powerful red light.[9] Rose foundation is made from the pink petals of flowering trees in the realm and imported to Tamriel.[3] Several pieces of armor of Daedric quality found in Tamriel are thought to have originated from Moonshadow; they are enchanted with a strong magical light enchantment, but are otherwise unremarkable.[10]

During Morian Zenas and Divayth Fyr's experiments to travel to Oblivion between 2E 418 to 2E 431, they managed to figure out a ritual to open a gate to Oblivion. Zenas decided to try going to Moonshadow as it was a safe option and visited the realm,[11] but then went on to various other realms before settling in Apocrypha.[1][12] He described Moonshadow to his assistant, Seif-ij Hidja.[13]

Following Vivec's indecent acts toward Azura at Hogithum Hall in the Capital City, Azura had made the regular gateways to the realm inaccessible by 3E 432.[UOL 1]