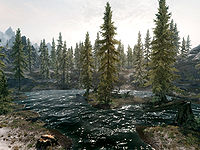 Clearpine Pond is a pond with a small island, located west-southwest of Solitude, just to the northeast of Pinemoon Cave.

The island is easily identifiable by the pile of logs and multiple fallen trees surrounding the island.

The island is inhabited by from one to three spriggans, but they do not attack unless you come within close proximity or take items from the dead alchemist or open the chest on the island. The spriggans can be engaged on your own terms by placing a rune spell at the base of the trees they're hiding in, similar to the way you can flush out draugr and skeletons slumbering inside sarcophagi. The spriggans will not cross the water surrounding the island, so you can easily pick them off with ranged weapons or spells or retreat and heal yourself if you struggle in a melee fight with them.

The chest on the island has a novice-level lock and is located inside a large rotten tree stump. There is a dead alchemist leaning up against the remains of the fallen tree trunk. On her person is a copy of the Alchemy skill book De Rerum Dirennis and both on her person and in an apothecary's satchel beside her there are several alchemical ingredients. The island has many harvestable plants and fungi growing on it and on the shore around the pond, as listed below, in addition to the three taproots recoverable from the spriggans;