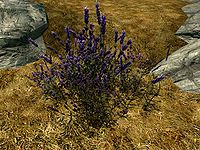 Lavender is an herb that flourishes in cold steppe climates, particularly in Whiterun Hold, but also in several other holds.

In terms of combinations of two ingredients, Lavender can be combined with 43 other ingredients.

254 guaranteed samples can be found in 95 different locations. Locations with the greatest numbers are:

530 lavender plants can be found in 73 different locations. Locations with the greatest numbers are: