Plague of the Dead 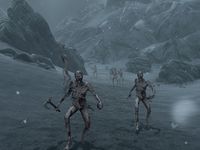 Plague of the Dead is a Creation that adds a new zombie creature type to the game. It was released on October 4, 2017 for 400 CC Credits.

In Skyrim, when the sun falls, the dead rise! Beat back the zombie hordes, and retrieve valuable Mort Flesh. (Creations appear at night at certain locations in the world and through a quest.) (Quest "The Rising Dead" starts by reading an Anonymous Letter delivered by courier upon reaching level 5.)

When you reach level 5, a courier will be looking for you to hand you an anonymous letter which starts the quest The Rising Dead. After reading the letter, you will be directed to a Ritual Site north of Southfringe Sanctum (map) to stop a group of Necromancers from using ancient magic to conjure zombies. However, once you get there you will discover that you are too late, as the site has been overrun with zombies. Indeed, zombie hordes will now randomly appear as world interactions all across Skyrim. You can also learn spells to summon zombies by finding the related spell tomes at the Ritual Site or as random loot.