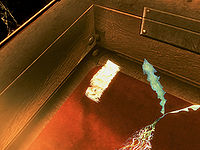 Wisp Wrappings are dropped by wispmothers along with glow dust.

In terms of combinations of two ingredients, Wisp Wrappings can be combined with 57 other ingredients.

With Dawnguard installed, one sample can be found in Volkihar Keep in a locked display case.

The remaining ways to obtain already-harvested wisp wrappings all have relatively low probabilities. The best bets are:

Wispmothers, including the Pale Lady, always drop wisp wrappings. However, wisps and wisp cores do not drop wrappings.