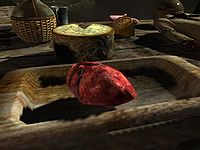 Human Hearts are used in Alchemy or at the Skyrim:Atronach Forge. They can be found in locations where people have performed the Black Sacrament ritual to summon the Dark Brotherhood, along with human flesh. Hearts cannot be taken from dead humans.

This ingredient's alchemical effects are identical to mort fleshCC.

In terms of combinations of two ingredients, Human Hearts can be combined with 56 other ingredients.

11 guaranteed samples can be found in 11 different locations:

It is categorized as a rare ingredient, meaning that it can only be randomly found in rare-type apothecary's satchels. However, they do not appear in the inventories of apothecary merchants (even if the Merchant perk has been unlocked). Unlike several other ingredients that are not stocked by apothecary merchants, though, human hearts can be sold to merchants. Other possible locations for samples include: