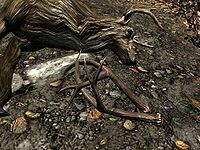 Small Antlers may be dropped by female elk, whereas male deer and elk drop large antlers.

In terms of combinations of two ingredients, Small Antlers can be combined with 45 other ingredients.

2-3(DG) guaranteed samples can be found in 2-3(DG) different locations:

Remaining ways to obtain already-harvested small antlers all have relatively low probabilities. The best bets are:

There is a 50% chance that a female elk will drop small antlers, in addition to venison and deer hide.