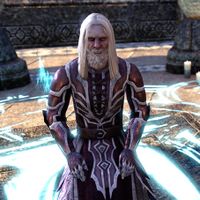 Alasan is a powerful Redguard mage, and one of the leaders of the Withered Hand. He is the son of Suturah, and his siblings plot to gain vengeance for their father against King Fahara'jad.

Alasan participates in the original theft of the Ansei Wards along with his brother. He can later be found at Tava's Blessing, performing a ritual to transform himself into a lich with one of the Wards as a focus.

When you arrive at Tava's Blessing, you will find almost everyone dead. Caused by Alasan and the Withered Hand, he will be using their deaths to power a ritual. After destroying the necromantic foci, you can enter the lighthouse where he lurks to confront him. He can be found kneeling within a ritual circle and an Ansei Ward in front of him at the top of the lighthouse.

He has dire words for you when you approach:

Alasan: "You've come too late. The ritual has begun, and you cannot strike me down."

At this, you have the opportunity to talk to him.

"You are the one who killed my brother Uwafa, are you not?
I will grant that you are likely a formidable foe, but once I become a lich, I will burn you to cinders. There's nothing you can do to stop me now."
How can you be sure of that?
"The ritual has begun, and I am already bound to the Ansei Ward as it is bound to me.
If you strike me down, the blade will be shattered."
That's a risk I'll just have to take.

When you break the ward, Alasan will keel over and his wraith-like spirit will appear above his corpse.

Alasan: "You broke the Ansei Ward? You think that will stop me? I am not finished!"
<Alasan's spirit disappears.>

After you take the broken Ward, Ansei Maja will appear in the circle. She assures you that it was the only way but warns that Alasan is now a powerful spirit and as a consequence of the ritual, the dead have risen. Maja will then ask you to collect reagents to reforge the Ansei Ward. While you collect the around the port town, Alasan will appear as a spectral wraith to taunt you:

Alasan: "You are undone by your own heroics, dog. I may not be a lich, but I have an army of undead!"

Once you ready to reforge the blade, he come back:

Once you have reforged the Ward and placed it on Ansei Shrine, Alasan's Soul will appear above the blade, ready to attack you.

When you place the reforged Ansei Ward on the shrine, Alasan's Soul will appear above it. Ansei Maja will prevent him from escaping as you use the Ansei Ward to trap him within it. 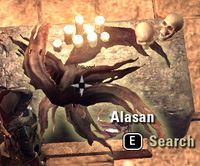 Alasan as a Wraith

After the Wards were stolen by Shiri and brought to the Motalion Necropolis, she will free Alasan from the Ansei Maja's Ward. When you approach the Ward to retrieve it you will find Alasan's wraith-like spirit guarding it.

Alasan: "Thanks to my sister, I am restored, and now … I will have my vengeance!"