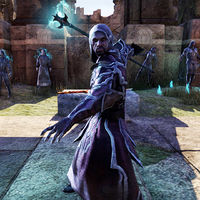 Uwafa is a powerful Redguard necromancer and one of the leaders of the Withered Hand. He is the son of Suturah, and his siblings plot to gain vengeance for their father against King Fahara'jad.

After successfully stealing the Ansei Wards, he can later be found at Tu'whacca's Throne where he can be confronted.

As you enter the vault, you'll hear:

Uwafa : "They've broken into the vault. Stop them, fools!"

As you move through the dungeon, Uwafa will continue to bark orders:

Uwafa : "Enough! Get the Ansei Wards out, now!"

By the time you reach where the Wards were kept, Uwafa and his brother can be seen escaping through the roof with the Wards in tow.

Uwafa : "The Ansei Wards are ours, fool! Soon, all Alik'r will fall!"

He is later encountered at Tu'whacca's Throne where the dead have risen. After helping Throne Keeper Farvad relight the braziers to allow Tu'whacca to cleanse the temple, you will be informed that Uwafa has holed up inside the Sanctum.

Once you have found your way inside, you will find Uwafa levitating inside a magic circle while the other priests of Tu'whacca are magically bound to the walls on either side of him. Behind him lies one of the Ansei Wards.

As you begin to fight him, he will turn to the priests and use them as weapons against you:

Some priests will die and then be raised as undead. As the fight continues he may shout other things:

Uwafa : "Your corpse will soon fight for me!"
Uwafa : "Alik'r belongs to the dead!"
Uwafa : "Death will not stop us!"

Once he is dead you can retrieve the Ansei Ward.

Along with the basic necromancer magical attacks, there is the following mechanic:

When he kills and raises three of the priests as zombies, he will then hold his staff in front of him as a white wind swirls around him as he heals and is invulnerable to damage. If you kill the priests too slowly he will have completely healed by the time you get back to him. He can do this four times before he runs out of priests.