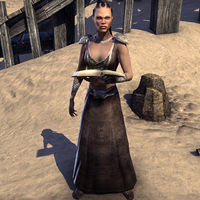 Shiri is a Redguard mage and Zohreh's apprentice who is helping with research on the Ansei Wards. She is first encountered at Tava's Blessing, having escaped the undead attack.

After you were sent to Tava's Blessing to find Shiri, it was assumed that she died during the Withered Hand attack. However, she will have survived and can be found near Prince Azah once Alasan is defeated and the second Ansei Ward is recovered.

If you try and speak with her before completing Alasan's Plot:

"I would like to speak with you, but I must finish reading this first."

After speaking with Prince Azah and if you haven't started the quest yet, she will say "I think I know where to find the third Ansei Ward"

Shiri will ask you to follow up on a lead about the location of the third Ward:

"It seems the necromancer Alasan underestimated you … I was hiding outside the lighthouse.
After you disrupted the ritual, I went in and found Alasan's notes. I think I know where the Withered Hand has taken the third Ansei Ward."
Where have they taken it?
"HoonDing's Watch. The Withered Hand is seeking out the birthplaces of the Ansei who forged the Wards. Just as Alasan did here, they can use these locations to corrupt the Wards.
The third Ansei—Halelah—was born near HoonDing's Watch."
Are you sure about this?
"I am sure of nothing, but this is my suggestion for where you should begin your search.
There is a wise woman in HoonDing's Watch—Priestess Sermenh. Perhaps she can give you more insight."
I'll speak with Priestess Sermenh then.
"Since both Alasan and Uwafa have been dealt with, the Withered Hand may be considerably weakened.
Perhaps the third Ansei Ward is closer at hand than you realize. If the gods are with you, I believe you will recover it quickly."

You can then ask her additional questions:

Have you spoken with Captain Rawan?

"Yes, and he passed along your message.
Though I'd much prefer to stay here, I will return to Master Zohreh in Bergama shortly … I only wanted to share what I discovered with you and Prince Azah first."

What else do you know about the third Ward?

"I could spend hours telling you about the role the third Ward has played in history, but I would only put you to sleep.
All you need to know is that the Withered Hand has it, and HoonDing's Watch is the best place to start your search."

You really think the Withered Hand is defeated?

"Don't you?
You've foiled their plans here and at Tu'whacca's Throne. You've defeated both Uwafa and Alasan … I would imagine the Withered Hand is in considerable disarray."

After Shiri's lead turned out to be a dead end, you will spend some time with Throne Keeper Farvad learning some Redguard history. Soon Captain Rawan will arrive with a dire message, Shiri was traveling back to Bergama with two of the Wards when she went missing. It is thought that she may have gone to Satakalaam to visit her cousin.

However when you arrive at the town, it has been invaded by Imperial forces and Nahirah appears to have killed in her own home. After some investigation, you will learn that she is the youngest child of Suturah and the sister of Uwafa and Alasan.

After you have dealt with the Imperial forces, Talia at-Marimah will contact you with some dire news. Shiri has revealed her true allegiance and now has her hands on all three of the Ansei Wards. 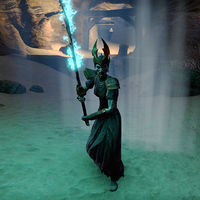 By the time you reach Shiri in the Motalion Necropolis, she will have transformed and is in the middle of resurrecting her father. When she sees you and your companion, Shiri will be determined to have her revenge.

Shiri: "You will pay for killing my brothers! This is for Uwafa! This is for Alasan!"
Shiri: "My father will soon be raised. There is nothing you can do."

As she approaches death:

Shiri: "And this is for all my family! I die, but my father will avenge me! Suturah will avenge us all!"

When she dies, her ritual will have succeeded:

The following dialogue's context is unknown:

"My name is Shiri. I am apprenticed to Scholar Zohreh in Bergama. She sent me along to assist Prince Azah in tracking down the second Ansei Ward.
I'd prefer to help you and the prince further, but Zohreh wants me back in Bergama."

This Elder Scrolls Online-related article is a stub. You can help by expanding it.
Retrieved from "https://en.uesp.net/w/index.php?title=Online:Shiri&oldid=2567367"