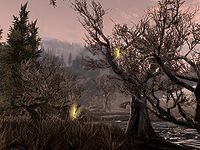 Torchbug Thoraxes can be acquired by catching torchbugs. Torchbugs come out at night in most non-snowy areas. Their slow flight and illuminated bodies make them fairly easy to catch.

In terms of combinations of two ingredients, Torchbug Thoraxes can be combined with 47 other ingredients.

33 guaranteed samples can be found in 13 different locations. Locations with multiple samples are:

Torchbugs appear at insect spawning sites, but only between 8pm and 11pm. Some of the sites (50 in all) generate only torchbugs, each one spawning at most 10 insects. The majority of the sites generate up to three nocturnal insects, with a random mix of both torchbugs and luna moths. These sites also typically generate blue and monarch butterflies between 6am and 6pm. In total, there are 576 spawning sites in 153 different locations. Locations with the greatest numbers are: